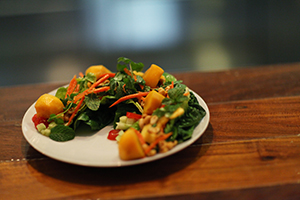 Riverside restaurateur Ronaldo Fierro believes in locally-produced food—it tastes good, it’s good for the economy, and it’s important for the health and vitality of Riverside, California, and its residents.

Owner of The Salted Pig, a downtown Riverside gastropub, and W. Wolfskill, a Riverside craft cocktail bar, Fierro has always strived to source ingredients as locally as possible.

“Since the beginning, our goal was to use local produce,” he says. Fierro defines local as within a 30-mile radius of downtown Riverside.

However, Fierro admits he was not aware of how challenging it could be to purchase local ingredients.

“We would get two or three cases of something, and it would be gone,” he says. The local produce utilized by Fierro’s establishment was merely supplemental, and often came from backyard citrus growers.

But since becoming involved with Grow Riverside, a joint effort between Seedstock and the City and community of Riverside, Fierro has grown more optimistic about being able to procure more locally-grown food. He appreciates how the efforts of Grow Riverside have brought people together from all links on the food production chain.

Just like Fierro’s businesses can’t afford to be isolated, neither can growers. He says that local food production in Riverside and the surrounding area provides opportunities galore not just for him and his operations, but for Riverside as a whole. Purchasing produce from local farmers keeps money in the area, and increases the stream of funds for associated businesses.

He gives credit to Grow Riverside for helping to create a synergy of cooperation among those committed to local food and agriculture in Riverside. “It all affects me personally,” he says. “Local foods help the overall system. Our goal is to support sustainable commercial farmers.”

The key, says Fierro, is to identify and create even more local food producers and consumers in Riverside. “We’re a high-volume local restaurant; if you build it, they will come,” Fierro says, not only of his two establishments, but of any enterprise in Riverside that contributes to the local food chain.

Fierro’s main obstacle in obtaining a steady stream of locally-sourced food continues to be lack of supply, as he has found it difficult to locate enough local farmers. “Growers don’t tend to be the best marketers,” he says. Currently, Fierro works with a handful of local growers. “I would prefer 20 or 30.” “We would like to source at least half of our food locally.”

He acknowledges that many of his restaurant and bar patrons don’t necessarily know or care about where their food comes from—even so, the taste tells the story.

“Restaurant customers put a lot of trust in us, and local food peaks their interest. We offer taste better than a chain restaurant—flat out, local food just tastes better.”

And because local food has a story, it delivers a personal experience to patrons like nothing else can.

Fierro will play a large role in the upcoming Grow Riverside conference, scheduled June 11-13. He is sponsoring a “Citrus Circle Dinner” on June 11 at California State Historic Citrus Park. This capstone conference dinner will feature and highlight local food, and will show Grow Riverside’s progress in fostering a sustainable local food and agriculture system that benefits the City and community of Riverside.

Those who don’t want to wait until June may attend an “In the Grove” dinner at Fairlawn Farms, located in the City of Riverside. Sponsored by The Salted Pig and Fairlawn Farms, this farm-to-table dinner, featuring local ingredients, will literally take place among orange groves. Fierro and Larry Thai, executive chef at The Salted Pig, will speak about their work with local farmers, as well as challenges and opportunities that exist in trying to source even more food locally.