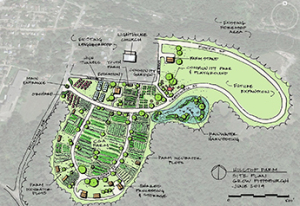 The Hilltop Alliance, a Pennsylvania nonprofit, is working on a project that could drastically advance urban agriculture in the state. The organization wants to turn a vacant 107-acre lot into Hilltop Village Farm, a multi-use development that would include 120 townhomes, a 20-acre urban farm incubator, a youth farm and CSA. If the plan is successful, the farm could be one of the largest urban farms in the country.

The organization was introduced to local developer Ernie Sota, who had a vision for a community of high density town homes anchored by an urban farm.

“Urban agriculture always starts with the intent of breaking even but really never does financially,” says Aaron Sukenik, Executive Director of the Hilltop Alliance. “We knew foundations would be interested in helping with the capital expenses of getting this thing up and running, but not keeping it running until the end of time. We knew we had to create a viable, break-even business plan for the first four years.”

Only 40 acres of the 107-acre lot are farmable, buildable acres. The Hilltop Alliance has structured a partnership with the developer to give them them an equity stake in the development, which will provide cash flow for the farm. Also, each town home unit will have a CSA share that will provide additional income. Members of the housing community will pay $500-600 in homeowners’ fees, and in return they will receive a share of fresh produce every two weeks. People living outside of the housing development will also be able to purchase CSA shares.

The incubator farm will include 18 quarter-acre plots that will be available for annual leases, although scholarships will be available. A farm manager will oversee the farms and manage the equipment sharing program.

“The farm doesn’t work without the housing,” says Sukenik.

Just Harvest, a Pittsburgh-based food justice nonprofit, has identified the St. Clair/Mt. Oliver area where the farm will be located is one of the top five food deserts in the state. The area is without a full-service grocery store, so having the Hilltop Alliance Farm could be the main source of fresh produce for people in this area.

Sukenik added that this neighborhood is home to many Bhutanese refugees whose culture dictates they only eat food that is produced within their community. The refugees are excited about the possibility of growing their own food close to home.

The Hilltop Alliance isn’t planning on running their own educational programs, but Sukenik says there are many organizations in the area who would be interested in using the farm to hold events and workshops.

At this time the Hilltop Alliance is working on financing and approval from the federal government, but hopes the project will move forward in the spring of 2016. The redevelopment is projected to cost $28 million, not including purchase of the land, and would be funded through a mix of  loans and grants.