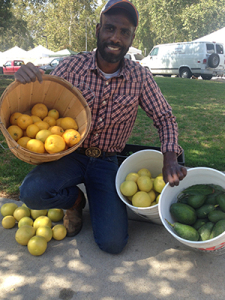 Panther Ridge Farm is a four-year-old, first-generation family farm in the foothills of Southern California’s San Gabriel Mountains. Founded by farmer and community organizer Hop Hopkins and his wife, Adalila Zelada-Garcia, the farm is focused on sustainable organic (non-certified) agriculture.

A variety of items are grown and raised at Panther Ridge Farm, including fruits, vegetables, nuts, herbs, flowers, mushrooms, heritage fowl and bees. A prime aim at the farm is to help increase food sovereignty, especially for poor people and those impacted by degradation of the land.

A second objective is education, which is fulfilled through the farm’s Outdoor School, where children and families learn about agriculture and the wilderness through hands-on, experiential programs. Participants learn how the natural world connects and sustains all living things, and the link between nature and agriculture is emphasized.

Educating people, especially children, about just and sustainable agriculture and ecology is gratifying for Hopkins.

“To know that we are successfully impacting families by providing them with meaningful outdoor experiences that develop capacities and skills in nature to encourage self-awareness and compassion with a sense of equity and responsibility for the Earth, their community and each other throughout their lives,” he says.

Panther Ridge Farm was the first project of The Institute for Culture, Ecology and Regenerative Communities, an organization addressing the linked causes of hunger, poverty and ecological degradation. It is a small operation, and serves as a social enterprise that emphasizes local production and improving food access for all. Owning land is important, Hopkins believes, especially in light of the sordid history slavery and of land grabs from minorities, as well as current corporate and industrial trends in farming.

In order to provide an alternative model of agriculture, Panther Ridge Farm is pushing for a community-based food system to ensure the people’s stability and self-determination, especially for the poor and people of color. Its name derives from the Black Panther Party (in addition to its Universal Declaration of Human Rights, the Black Panthers provided free breakfasts to 20,000 children across the United States).

Hopkins believes that profit-driven economies adversely impact ecolosystems, including the for-profit agriculture system. Therefore, a primary challenge for Panther Ridge Farm is to become profitable by creating demand through community outreach and education.

But profitability is certainly not the primary aim.

“We are striving to be the best ‘for-benefit’ company in our community,” Hopkins says. “Profit is important; however, people, planet and community should be strengthened as a result of our work.”

Panther Ridge Farm has a web site but no social media presence, and relies mostly on face-to-face interactions to get the word out about the good work it’s doing. This is intentional, according to Hopkins, as he feels that social media can cheapen a noble venture.

“We are not Luddites but we have lots of concerns and doubts about using social media sites that commodify our lives, sell our ‘likes’ and data mine our ‘clicks” to achieve our long-term goal of creating a more reverent, just and interconnected community,” he says.

Hopkins sees his mission as extending far beyond Panther Ridge Farm. His long-term vision is to build an entire network and infrastructure of local sovereign farms—farms that will form an interactive community with local food at its epicenter.

Additionally, at least when it comes to agriculture, Hopkins says that Los Angeles, as well as most other urban areas, is rich in resources but lacking in infrastructure, networks and public policy. Panther Ridge Farm is working to change this, not only for itself, but for other area agricultural producers.

“We try to facilitate the process for other urban farms,” he says. “You can’t just be a farmer in Los Angeles; you’ve got to be involved in the political process.”

He is pleased with the progress of Panther Ridge Farm, and acknowledges that its growth has progressed with “fits and starts” since 2011, when he and Zelada-Garcia purchased the property, which included an old house on a large lot.

“Land in Los Angeles is expensive,” Hopkins says. “We paid for a bunch of lumber and rats and got a little bit of land.”