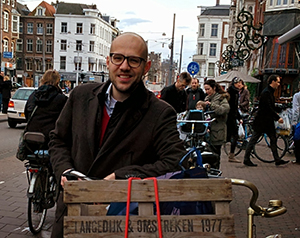 Chiel  Muurling is the founder of Wetailer, a shared economy-model that fosters collaboration between urban food producers. (photo courtesy of Chiel Muurling)

“For every new microbrewery opening up in your city, there are thousands of home brewers with dreams of selling their beers to you as well, whose dreams go unfulfilled,” says Muurling. “The same goes for home bakers, chutney makers or urban foragers. Food is hot, and people want to experience real foods, made by real people, near them.”

Wetailer addresses this disconnect by connecting the sharing economy with cottage food makers. Through its services, food makers can raise capital via pre-selling, and food makers can work together in sharing and lending equipment and production space. They can also share or arrange transportation of their food products with each other.

“My interests and background collide,” says Muurling, who brews his own beer and has a background in digital marketing. Indeed, the home brewing movement inspired him to begin Wetailer. “There are 1.25 to 1.5 million home brewers in the United States, and lots in Europe as well, not to mention bread bakers and backyard and urban farmers.”

Muurling believes the sharing economy, modeled after such other ventures as Airbnb and Uber, will work in the cottage food industry by making it easier to share on the production side.

“It makes sense economically,” he says.

But part of the strength of what Wetailer offers, says Muurling, is that it’s not just about economics—it’s also about the added bonus of connectedness and cooperation.

“People want to collaborate,” he says.

Through a Wetailer-facilitated “test kitchen”, a food maker can gather a group for tastings of a new product, which provides valuable feedback. Initial funds needed to get the product to market may also come from local colleague, or “Wetailers”. And once a food product is ready to be sold in the marketplace, other “Wetailers” and commercial kitchens/production areas can provide use of excess production facilities. Wetailer also provides an Internet presence for food makers to set up their own online stores.

Registration is free—Wetailer makes money by charging a service fee of 7.5 percent of the net price for each food item and 10 percent of the total amount raised through test kitchen projects.

Muurling used his own money to fund the pilot.

“I just want to see if this has any legs,” he says. “If it does, then investors will be pursued.” He envisions Wetailer as a source of local food not only to individual customers, but to restaurants as well.

So far, he has received positive reaction from food makers, but finding willing buyers for products purveyed through Wetailer has proven more difficult. Another obstacle he has encountered is explaining to food makers how sharing resources could work.

“When I talk to brewers, it’s easier because I know them,” he says. “But it’s different with pasta makers, for example.”

Wetailer’s marketing efforts are currently focused on Amsterdam, with an eye on larger cities in the Netherlands. “It’s an urban thing; we need consumers in high-density areas who are eager for this,” says Muurling.

If Wetailer prospers, Muurling sees the possibility of it spreading across Western Europe, where the cottage and artisan food movement is exploding, especially in cities like London, Berlin and Copenhagen.

“The key is getting out there to tell people the story of Wetailer,” Muurling says. “It’s important to explain why what we do is beneficial.”