Going a Step Beyond Farm-to-Table, SF Restaurant Slings Aquaponic Fare Along with a Hefty Helping of Sustainability 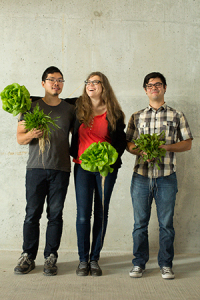 Established restaurateurs Karen Leibowitz and Anthony Myint have a penchant for accountability in the food industry. Their latest offering, The Perennial, is set to open this spring. It will provide tech district office workers with a lesson in sustainability as well as a locally grown lunch.

“It’s really important to us that our restaurants are not purely business concerns but also work on building community,” says Leibowitz, who has opened several restaurants with her husband including ‘Mission Chinese Food’ and now ‘The Perennial.’

“In 2012, we had a daughter and that got us thinking more seriously about the future.  We started to think about ways the restaurant industry could positively engage with environmental issues,” says Leibowitz. “What would happen if we made a restaurant that brought together all of the best practices with regard to the environment and were really transparent with all our success and our failures and shared that with other restaurant owners and consumers?”

The Perennial will offer locally sourced organic food. Leibowitz and Myint will grow much of the restaurant’s produce using aquaponic methods in a 2000-square foot greenhouse in neighboring Oakland. Not all of the restaurant’s produce will come from the greenhouse. Local farms will contribute to the menu. Perennial will serve beef adhering to Carbon Cycle Institute standards and breads made with perennial grains.

Deeply concerned with how much restaurants contribute to climate change through carbon, Leibowitz and Myint hopes to lead by example. By making their restaurant as waste efficient as possible, they hope to illustrate the shared responsibility that is local sustainable food and the accountability of consumer choice.

“We’re just really trying to get a step beyond farm-to-table, to really think about specific farming practices and how they impact climate change,” says Leibowitz.

Hoping to attract the young tech workers from surrounding office buildings, the restaurant will seat 70 guests and house a working model of the aquaponics growing concept. The Perennial illustrates the symbiosis of the closed loop system by having the eatery and greenhouse codependent on each other’s success in waste reduction.

“We’re going to take the food scraps from the kitchen and feed them to worms and larvae. Then we’ll dehydrate the worms and larvae in a solar dehydrator and feed them to the fish,” says Leibowitz. The Perennial will offer catfish and sturgeon to its customers and has engaged the services of Nathan Kaufman, of Viridis Aquaponics to design and maintain the aquaponic system at the greenhouse.

The restaurant will be located on the ground floor of a new apartment building across the street from Twitter’s headquarters in San Francisco’s Mid Market district. “We think it’s a good fit for the neighborhood because it’s the new tech epicenter of San Francisco. We felt this kind of restaurant, that’s really looking at ways science can innovate in the food business, would be appealing to people in the tech industry,” says Leibowitz.

A large portion of Perennial’s profits will go into expanding the couple’s nonprofit project, Zero Food Print. Still in its infancy, Zero Food Print hopes to set the standards for sustainability assessments in the restaurant industry.

“We are organizing life cycle assessments for restaurants to see where their greenhouse gas emissions are coming from, helping them make improvements and then facilitating offsets related to the food world,” says Leibowitz. “The restaurant industry should be leaders in environmental sustainability.” Zero Food Print has already completed an assessment of Copenhagen’s famous sustainable eatery Noma.

The Perennial, will offer its patrons a glimpse at the burgeoning accountable dining-out experience while illustrating how responsible restaurants can make a difference.  “Our hope is that it will be the beginning of a movement toward environmental sustainability in the food business,” says Leibowitz.  The doors are set to open this spring with work on the greenhouse starting this January.