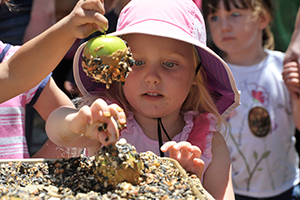 Image courtesy of the City of Irvine, California

Known as the “First Great Metropolitan Park of the 21st Century,” the City of Irvine’s 1,300-acre “Great Park,” is living up to its ambitious goals.

Created on the grounds of the former El Toro Naval Base, the park’s focus on promoting a relationship between local residents, sustainable food systems and community green space provides an example of how far a city can go to foster sustainable agriculture.

“We’re really trying to maximize opportunities for agriculture in our city, as well as honor the agricultural heritage that exists here in Orange County,” says Meredith Reynolds, Environmental Programs Administrator for the City of Irvine.

The growth of urban agriculture in Irvine is the result of decades of careful planning to ensure that the area’s farming tradition would be preserved.

The city’s vision for the Great Park began in July of 1999, when the El Toro Naval Base closed for good. There was some debate over whether or not the base, with its four commercially viable runways, would become a regional airport. Local outcry against noise pollution held sway, and in March 2002, the 4,682-acre site was sold to a developer, Lennar Corporation. Lennar then transferred ownership of the 1,300 acres that now constitute the Great Park to the City of Irvine to be transformed into one of the nation’s most expansive and forward thinking green spaces.

Known for its playing fields, visitor’s center, carousel, hot air balloon and much-heralded arts complex (inside a converted hangar), the Great Park is also home to a weekly farmer’s market, the Incredible Edible Farm and the Farm and Food Lab.

The Incredible Edible Farm is managed by OC Produce and funded by the city, with all produce going to the Second Harvest Food Bank. A 178-acre wildlife corridor devoted to the restoration of native plants and habitat, which allows animals free movement between the mountains and the sea.

Farm and Food Lab is at the core of the park’s sustainable agriculture programming. It’s open year round and staffed by Master Gardener’s from the University of California Cooperative Extension.

“It’s intended to be sort of a discovery lab; somewhere kids can come and learn about food and plants and bugs and soil,” says Reynolds. “It’s the ultimate hands-on experience. You can come, you can touch, you can play. The visuals are so compelling.”

At the Farm and Food Lab, children walk past fruit trees and raised beds, interact with chickens, enjoy workshops and story time in the garden. Educational signage, a butterfly garden, pizza garden, solar panels, an aquaponics system and a vertical garden illustrate the diversity of sustainable opportunities available to visitors.. In November of 2014, the park enjoyed over half million visitors.

“We get many visitors from the local and regional area, to folks from all over the country and the world to learn about what we’re doing with farming. We’re really happy to share lessons learned and best practices,” says Reynolds.

In 2013, the Great Park played host to the U.S. Department of Energy’s “Solar Decathlon.” Irvine will again host the renewable energy expo in October of 2015. Currently the city and its partners are working on “FivePoint Communities,”a new 688-acre expansion. This phase should be completed in the next five years and will include a 176-acre sports park and a 185-acre golf course.

“We can demonstrate that we can impact the community through jobs created, through the food that we grow that provides meals to those that need it, to general education, and to our youngest residents who don’t know where their food is coming from,” says Reynolds. “It’s always fun to be in a position to provide a service to our community that helps them learn something; that helps them connect to the land and to connect to the history of the region.”