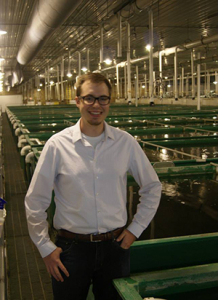 How can a cold, Midwestern state grow organic produce all year, while also providing fresh fish to the local community? Those are the questions Justin Long, co-founder and CEO, and Jason Fry, co-founder, asked themselves before founding Blue Lotus Aquaponics in November 2013.

Before creating their company, Long and Fry did their research by traveling to a few Midwestern states and visiting places where people were experimenting with aquaculture techniques.

Long wanted to dabble in aquaponics because of its sustainable, high-yield nature. And Fry’s family background in commercial farming in northern Indiana helped him to flesh out the company’s overall concept.

Much of Long’s research focused on how other people are making aquaponics work in Midwestern climates.

“Aquaponics is something that’s really taking off in some southern states where the climate is a little more arid,” Long says. “But in the Midwest, you get weather the way it is today; with a high of 10 degrees.”

Once Long and Fry gathered research, the two made Blue Lotus Aquaponics a reality. While the company is still in a pilot phase, the co-founders are zeroing in on a final, first location for their masthead operation.

Fry was intrigued by aquaponics because of its ability to produce fresh food, and seafood all year.

“The Midwest is somewhat of a food desert — it’s nutrient deprived. Many areas of the Midwest can’t produce fresh produce all year,” Long says.

A lot of the Midwest’s produce is shipped in from South America, and the coastlines during winter months. During shipping, produce can lose much of its nutrient value — almost 20-30 percent, Long says.

In addition to getting foods when their nutrient value is higher, the product also experiences a greater shelf life.

“We aren’t here to replace existing agriculture models; we are here to work with them,” Long says. “We can always retool our greenhouses to exactly what’s needed. We can switch to more exotic types of plants in the summer, and in the winter, we can grow the crops that don’t grow well in the winter here. It was designed and programmed to handle the local food system.”

Blue Lotus Aquaponics is focused on building the company with a focus on the local community. It wants to keep its profits “as local as possible,” as Blue Lotus will benefit the immediate community.

“We are committed selling as local as possible,” Long says. “The whole goal of the company is to provide quality local seafood and produce. There is a population base locally and there are several buyers in our communities. And the produce will be organic, so, there will be many people interested buying the produce and fish product.”

Long also was drawn to the aquaponic model because it saves water. He explains that although water supply isn’t an issue in the region, he is looking toward the future.

“Water is going to become an issue in the future,” he says. “In our location, we had a drought a few years ago. We’ll still be able to function in that environment because of our water usage. We are able to filter almost 100 percent of our water back into our system. We are taking something that we would normally be discharging and we can now reuse. And the way we filter the water is through the natural occurring root systems in plants. We are creating an environment that’s better for our fish and more sustainable for our operation.”

Long says Blue Lotus already has buyers who are committed to buying everything the company could produce.

“It’s just a matter of getting the fish product out,” Long says. “There are a few ways we can go about doing it: processing it ourselves at an additional cost, or selling fish live to people.”

To help weigh the company’s options, Long and Fry are working with people in the aquaculture arena. The company aims to work with local butcher shops and fish processors to get its product sold in those shops.

Blue Lotus’ biggest current challenge is educating Midwesterners on the benefits of seafood.

“It’s not common for people to have any type of seafood in their diet,” Long says. “Our population in the future will need to rely on more sustainable calories. We can produce one pound of seafood to one pound of Indiana soybean product, whereas if you’re trying to produce poultry, swine, or cattle, which is the worst, you need 15-20 pounds of soybean product to generate that one pound.”

Long and Fry want to see Blue Lotus grow into local, major cities, starting in Indiana, and branching out.

“The idea of the model is to have a location in a major populace area supplying that area with the produce they need — fill the grocery stores with food that would otherwise need to be shipped in,” he says. “We want several Blue Lotuses rather than one centralized location.