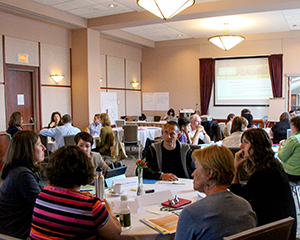 Two recent developments in Michigan have caught the attention of local and sustainable food activists across the country. On December 14, 2014, Michigan’s governor, Rick Snyder, abolished the Michigan Food Policy Council (MFPC), absorbing the work of the Council into a new subcommittee within the Michigan Department of Agricultural and Rural Development.

The same week, the Center for Regional Food Systems (CRFS) at Michigan State University issued a Request for Proposals to coordinate a new network of local food councils across the state.

Although it is not clear if these two events are directly related, they both represent a transition in the local food movement in the state of Michigan.

The Michigan Food Policy Council was created in 2005 by then Governor Jennifer Granholm with the task of bringing together stakeholders across the state interested in improving the food environment in Michigan. The council worked with a variety of urban and rural community groups, providing direct support to farmers as well as supporting initiatives to increase access to fresh, local food, especially in underserved communities.

The Council, along with groups like the CRFS, also conducted research and made policy recommendations to the governor’s office. In his executive action abolishing the MFPC, Governor Snyder recognized its contributions, stating that during the seven years since it was created, “academic, government, nonprofit, and private entities made significant progress on… fostering a healthy and available food supply for all Michigan residents.”

The Council’s work included collaboration with local food councils, including a fledging effort to pool these local councils into a statewide network. Now the CRFS is continuing this initiative.

“We saw it as part of our charge to take the information and momentum and see where it needed to go next,” explains Liz Gensler, an Academic Specialist at CRFS. “People are expressing the need for local level collaboration and support.”

In 2014, CRFS conducted surveys and held meetings with representatives from local councils across the state. Through the RFP, CRFS hopes to identify an individual or group to launch an effective network that will bring together diverse local food councils across Michigan.

Gensler identifies two main goals for the newly created network. One is to allow the local food councils to connect with each other and learn from each other’s experience. This will help food councils build capacity and become more effective.  The other goal, according to Gensler, “is to have a collective voice, to raise issues to the statewide agencies, to bring voices from the local level to the state level. There’s strength in numbers.”

Some groups have expressed concern about Snyder’s dissolution of the MFPC, seeing it as a signal of shifting priorities and lack of support for small farmers. In its report of the governor’s action, The Michigan Food and Farming Systems’ MI Food News, notes, “In the battle between those who think pesticides and GMO’s are the way to go versus those who want to shift the discussion to sustainability and local sourcing, this appears to be a winning power play by the former.”

However, Gensler isn’t as pessimistic. She notes that over the past ten years, Michigan has seen enormous growth in the infrastructure necessary to support local agriculture. With this in mind, she says the dissolution could be an opportunity to work across agencies and share information more broadly.

“When these unique food issues come up, there’s not one department or organization that takes care of it,” she says. “The table includes a lot of players that can have an impact.”

Gensler adds that CRFS is viewing this as a transition and that the change has benefits. She echoes the sentiments of other former members of the MFPC, describing the new structure as a shift towards a more action-oriented food policy.