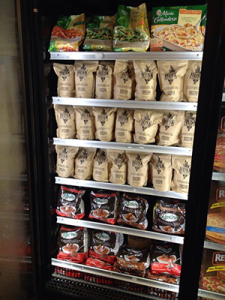 Nick Carter, Adam Moody and Chris Baggott came together a couple of years ago to invest in a processing facility in Greenfield, Indiana. Their goal: to launch a value-added sustainable company to place local foods in grocery stores.

Husk grows market share in the local frozen food market through a combination of entrepreneurial know-how and the power of social media. At the close of their second growing season, the company has established market share for local farmers in a grocery store world dominated by multinational wholesalers.

Nick Carter, president of Husk, has a family background in farming and discovered a niche market for meat rabbits in his native Indiana. His company Meat the Rabbit allowed him to use his farming background while learning the ins-and-out of the wholesale sustainable agriculture market. Co-founders Moody and Baggott, with successful technology startup and food processing backgrounds, were ideal bedfellows when Carter decided to branch out from game meats into the world of locally grown, flash-frozen foods.

The cofounders discovered that although the local food scene had much support, it only made up a small percent of the American food industry.

“Why are farmers’ markets crowded all summer long, and when it all adds up at the end of the year the money spent on local food is just a pittance? The answer we came up with was preservation,” says Carter.

Husk began gathering and packaging fresh vegetables for regional distribution in a small processing plant it funded. All of Husk’s produce comes from Indiana farms that use sustainable practices and non GMO seeds. Four farms within 80 miles of the processing plant provide Husk with their local produce, with approximately 50 acres dedicated to sweet corn production. Although all grown in Indiana, Husk vegetables are available in a “one state away” region that includes Illinois, Indiana, Kentucky, Michigan and Ohio.

Husk has experimented with other vegetables but finds corn, beans and gourds work well with their facility and target market.

After securing and freezing the produce, Husk must get their product on local shelves.

“We already have a brilliant food supply chain in this country called a grocery store. Instead of starting a new supply chain like farmers’ markets or direct-to-consumer marketing, we wanted to get local food into the grocery stores,” says Carter. By utilizing the existing grocery store infrastructure, Husk creates year-round access to local food, he adds.

It wasn’t long after starting the company that Carter realized how challenging it can be for a small local producer to gain a foothold in the established grocery store vendor process. Building relationships with the store is only part of the issue. Small producers must be able to ensure a steady supply, maintain the same safety and sourcing standards as larger companies and adhere to established labeling, packaging and coding standards. Getting shelf space in the freezer section is no easy task.

“It was pretty easy to get into the coops and independent grocers. Then we went to one of the biggest chain stores here in Indiana and we tried to get that sale and it was a quick no,” says Carter. “They have large secure supplier contracts and the frozen section is expensive real estate in the store. You don’t take risks on those shelves.”

Despite the knock-back, Husk reached out to its growing customer base through social media, asking approximately 20,000 Facebook followers. Husk asked their fans to drop off new item request forms at their local supermarket.  Today, Husk has produce in all 80 of the “quick no” chain stores around Indiana. Using the same technique, Husk managed to gain shelf space in Kroger, Walmart and a local branch of Whole Foods.

With four full time employees and 18 seasonal employees working in a less than 5,000 square foot facility, Husk is a small company. Although still in the startup phase, Carter sees the “path to profit” as already established, reminding would-be slow food entrepreneurs that there is money to be made in the world of small local agriculture.

“Part of sustainable ag is financial sustainability. In a venture funded business sometimes it will be years before you actually turn a profit. It’s a very capital-intensive business to start for sure, but there’s definitely a return,” says Carter.

When Husk is not using their processing plant for fresh vegetables, they partner with regional producers to use the space for value added products including soup and gluten free baking mixes. In the future, after showing the profitability of their Indiana plant, Husk hopes to open 26 regional facilities providing local produce to freezer sections across the nation.