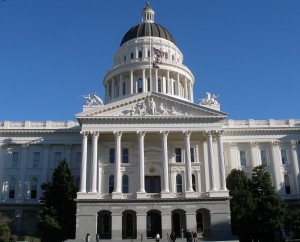 One of the main impetuses for AB 1826, according to San Francisco Department of the Environment commercial zero waste senior coordinator Jack Macy, is keeping organic waste out of landfills.

“We need to divert food waste from the landfill,” says Macy, who worked on the legislation. “We also need to conserve landfill capacity.”

“We’ve been really good at recycling in California, such as bottles and cans,” says Lapis. “But we haven’t done as good a job with commercial waste.”

The new law goes beyond recycling, focusing on renewable energy from waste through composting and anaerobic digestion.

According to Sacramento-based Californians Against Waste, AB 1826 will lead to the expansion of composting and anaerobic digestion infrastructure in the state, as well as a cut in greenhouse gas emissions. Methane, one of the gases produced by decaying organic waste, is many times worse than carbon when it comes to trapping heat in the atmosphere.

“It was a compromise to slowly phase it in,” says Macy. Businesses, he said, were concerned about lack of existing infrastructure and possible high costs.

“Overcoming knee-jerk opposition from most folks was the biggest obstacle,” says Lapis. Businesses expressed concern that their contracted waste management handler would be unable to offer compliant services.

To address this question, another compromise was reached. Under the new law, commercial waste producers will now legally be able to do business with waste management companies outside their contracted franchise hauler.

While some businesses will need to adjust the way they handle waste, others won’t need to adapt much at all. In San Francisco, recycling organic waste is already common practice, and Safeway and Vons grocery chains statewide already handle waste in a similar manner, says Macy.

The Ferry Plaza Farmers Market in San Francisco already has a vigorous waste recycling program. Through its Waste Wise Initiative that started on Earth Day 2008, more than 90 percent of its waste is composted or recycled, says spokeswoman Susan Coss. It offers a Waste Wise Farmers Market Handbook for farmers’ markets that would like to implement similar programs.

Also on September 28, Governor Brown signed into law an associated bill, AB 1594, that eliminates a state law loophole which allowed green waste, such as mulch, clippings, and other organic waste used as landfill cover to legally count as being “diverted” from landfills. The new law stipulates recycling such green waste.

“California is on the forefront of the farm-to-fork movement, but the next step is to move the entire state full circle and transition from fork-to-farm,” Chesbro said in a press release.

AB 1826 was backed by a wide variety of supporters, including the City and County of San Francisco, Community Alliance with Family Farmers, Los Angeles Alliance for a New Economy and Solid Waste Association of Orange County.