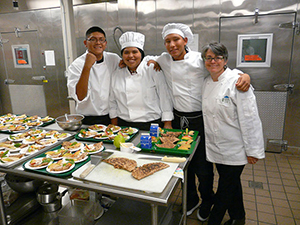 Sustainable agriculture techniques like companion planting and dryland farming were practiced for thousands of years in North America by Native Americans. Today, health problems and loss of ancestral knowledge about food and farming are common in many tribal communities. Sustainable farming is a way for tribes to get back to their roots while addressing these problems.

Here are five organizations looking to their heritage for solutions to address these and other problems.

Clayton Brascoupé could see that something was being lost. Knowledge about how to grow and make traditional foods, youth interest in farming and the seeds of crops that indigenous people have grown for centuries were fading. At the same time, he had witnessed the deterioration of community health, especially with respect to obesity and diabetes. It was these problems that drove an intertribal group of traditional small-scale farmers to form TNAFA in 1992. Based in Santa Fe, NM, the organization now includes families from more than a dozen tribes. With Brascoupé as the director, TNAFA offers workshops in seed-saving, home gardening, making traditional foods, crop marketing, sustainable design and more in order to “revitalize traditional agriculture for spiritual and human need.”

The White Earth Land Recovery Project started out focusing on land rights struggles faced by the Anishinaabeg people of the White Earth Indian Reservation in Minnesota. It has expanded its focus to many issues affecting the Anishinaabeg and indigenous people in general.  WELRP now works “to continue, revive, and protect our native seeds, heritage crops, naturally-grown fruits, animals, wild plants, traditions, and knowledge of our Indigenous and land-based communities” and to “maintain our culture and resist the global, industrialized food system that corrupts our health and freedom through inappropriate food production and genetic engineering.”

Their seed library projects collect not only seeds but also grows plants to produce more seeds as well as collecting stories and videos about planting and growing. They have even re-grown forgotten strains: when an archeological dig found squash seeds in an 800-year-old clay pot in Minnesota, WELRP was able to grow 50 seeds of a squash they called Gete-okosomin (“really cool old squash”).

The San Ildefonso Pueblo and other southwestern tribes have been farming since at least 125 A.D. using dry farming techniques like “waffle gardens.” The Pueblo started their farm in 2010 on a small plot in the backyard of Tribal Councilman Tim Martinez. Now there are eight acres in cultivation and many families from the community with their own fields and plots. A community-built hoop house extends the growing season. Traditional varieties of corn, beans and squash sink their roots in waffle gardens, along with onions, lettuce, carrots, okra and dozens of other crops.

Elders of the Pueblo contributed knowledge to help today’s young farmers learn how to watch moon cycles and natural migration patterns to decide when to plant and harvest, and how to prepare and tend the crops as their ancestors did. Produce is sold at a farmers’ market to provide affordable, healthy and delicious food for the community.

The Tohono O’odham Nation is in the middle of the Sonoran desert, near Tucson, AZ. The group’s work focuses on food systems, health and cultural revitalization. TOCA’s “New Generation of O’odham Farmers” program trains community members in the cultivation of traditional and non-traditional crops. The Desert Rain Cafe opened with a goal to make these healthy, traditional foods more easily available to the community. TOCA also worked with Tohono O’odham school cafeterias and Sodexo, the school food service provider, to create healthy weekly menu options based on traditional foods.

Based in Okmulgee, OK, the MFSI uses sustainable agriculture, as well as cultural education and community, to empower Mvskoke (Muscogee) people to provide for their own food and health needs. The Mvskoke originated in the southeast US, where seasonal floods of creeks and streams provided fertile conditions for agriculture, before their forced relocation (the Trail of Tears) to what is now Oklahoma. The MFSI offers regular cooking classes for traditional foods like blue corn dumplings and sour cornbread, and coordinate with the Kerr Center for Sustainable Agriculture to offer free beginners’ farming and ranching classes, open to the community. They also worked with the government of the Muscogee (Creek) Nation to set up the Muscogee (Creek) Nation Food & Fitness Policy Council, and have established a farmers’ market and a seed bank.