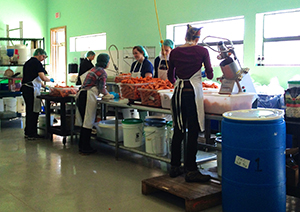 The Washtenaw Food Hub in Michigan is full of life as The Brinery crew processes carrots for their lacto-fermented “Jape Kin Cod” pickles. (photo by Kim Bayer)

Titled “A Case Study in Building Effective Networks for Food System Change,” the publication tells the story of how and why various food hubs came together to build the Michigan Food Hub Network, according to Rich Pirog, senior associate director of the MSU Center for Regional Food Systems. It was also part of the requirement for the grant funding the network receives.

“[The report] is a way to share the model publicly for audiences throughout the United States,” he says. Michigan State University and the Michigan Department of Agriculture and Rural Development are key participants in the network.

One of the main reasons for the Michigan Food Hub Network was to form a co-op of sorts. Through working together, food hubs across the state have been able to pool their knowledge, expertise and resources. It has been advantageous for participating food hubs to cooperate and learn from one another, according to Pirog. A main task of the network, he says, is to educate people about the work of food hubs.

While many people may have never heard of food hubs, Pirog says there are many misperceptions about what they are and they work they do.

“There is a food hub story in the media every day,” he says. “But often, writers are not really describing food hubs.”

The correct definition of a food hub, says Pirog, is an organization, whether for-profit or nonprofit, that aggregates, distributes and markets locally-sourced food. Contrary to common perception, farmers’ markets are not food hubs, he says. Food hubs are a collaborative effort toward aggregating the accessibility to local food.

“The key is local,” he says. “Food hubs are part of the evolution of the local foods movement.”

Since the network’s inception, participating food hubs have learned both from their successes and shortcomings. Key lessons learned during the past 30 month include:

Pirog says food hubs that have been in business longer are more likely to be viable. Another key to success is having adequate cash flow in order to make improvements, obtain loans and pay off creditors.

The case study also tries to raise awareness of an obstacle that has historically stood in the way of free and just access to good (affordable, healthy, local) food: racism. The report notes that structural racism within the food system in the United States and in Michigan continues to persist, and urges food hub participants to be “intentional about the messy, complicated work of respectfully crossing project, business, and cultural boundaries to connect all the elements of good food in situations that increase good food access.”

Looking forward, Pirog is excited about the future of food hubs. “There’s a lot of buzz about food hubs right now,” he says. “Demand for local foods continues to increase, and conventional distributors are increasingly getting into local foods. There is a place for food hubs, but they’re not the answer to every situation.”