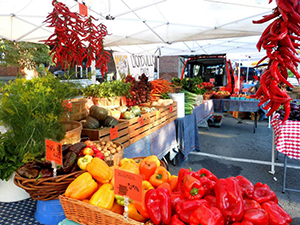 Maria Topitzer, the owner and proprietor of Lyonsville Farm in Colrain, Massachusetts, comes from a family of farmers.  Her grandmother grew up on a dairy farm in Pennsylvania and Topitzer has idyllic childhood memories of visiting her great grandmother there.

“I loved the open space,” she describes. “I loved running through the hay fields. I loved the whole feel of it.”

Topitzer’s great grandmother was the sole proprietor of the farm, and inspired by those early memories, Topitzer has taken up her mantle, joining the growing ranks of women making a living farming. Her path to farming provides an example of how recent agricultural trends supporting sustainability have had a particular impact on women in agriculture.

Topitzer’s formal entry into farming started at the Stockbridge School of Agriculture at the University of Massachusetts, Amherst, where she obtained a Bachelor’s degree in 2008 in Plant, Soil and Insect Science. As Topitzer remembers, women comprised about 50 percent of her graduating class. Between 2004 and 2011, women’s enrollment in national agricultural programs outpaced men by over 10 percent, according to a USDA Food and Agricultural Education Information System study.

As Topitzer describes it, Lyonsville Farm started as “a large garden.” Her first crop: an abundance of strawberries, which she started peddling at a local farmers’ market the year of her graduation from Stockbridge. She did so well at the market that she quickly started selling other kinds of produce, and invested in a more professional public presentation of her farm. By 2011, she was selling at two local markets and her original quarter-acre lot expanded to three.

After a disappointing attempt at creating a CSA program at Lyonsville Farm, Topitzer joined the Common Wealth CSA in Greenfield, Massachusetts. She also decided to close her stall at one farmers market, and as a result, doubled her sales at the other.

“I feel like every year I’ve been expanding and learning,” she notes as she reflects on Lyonsville’s trajectory. And each year, her sales expand too.

Colrain is part of a larger community that strongly supports local agriculture. In addition to the Stockbridge program, western Massachusetts is home to many advocacy organizations for farmers that provide technical support and have helped develop a consumer base hungry for local agriculture. This is an environment in which women farmers, who tend to operate on a small scale, can flourish. Specifically for Topitzer, this organizational and public support has translated into high sales at farmers’ markets and an option to pool resources with other small farms to develop a successful CSA. Topitzer also benefited from technical assistance that, among other things, improved her marketing strategies.

Her only negative experience as a woman in farming involved an uncomfortable interaction with a tractor supplier. Recounting her frustration with the supplier, who seemed to think Topitzer had “done something wrong” to cause the problem, Topitzer laughs as she admits resorting to a strategy unfortunately familiar to many women dealing with car dealers: “I ended up having my husband call them.”

Women farmers’ focus on small-scale farming is in part born of necessity, according to Topitzer. Men’s continued dominance of large-scale agriculture makes it difficult for women to network and to obtain resources necessary for investment in the industry. However, many women are drawn to farming on a small scale for the same reason as their male colleagues: they appreciate its focus on sustainability and health.

The movement towards sustainable agriculture can also offer opportunities for family work-balance missing in other professions. In Topitzer’s case, her mother and in-laws are present at the farm, often watching Topitzer’s children while she is working.

“It’s good for me because my son plays outside all the time,” she says. “He’ll be outside with my mom playing and I’ll see him at lunchtime, and I can see him throughout the day.”

Perhaps her own children’s memories of running through the fields will lead another generation into farming.