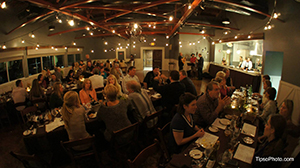 And this Central Florida food destination offers even more—in addition to its market, entertainment and education draws, East End Market is also a food hub, complete with educational opportunities and an incubator kitchen.

Located in the city’s Audubon Park Garden District, East End Market’s home is a two-story structure that used to be a church. It opened for business in 2013.

“We put the pieces together in a unique way,” says John Rife, founder and owner. The vision, and challenge, he says, was to meld the story of individual parts (market, kitchen, restaurants, etc.).

According to Rife, one of the initial challenges was working with the City of Orlando, as existing municipal codes were not set up to deal with a food hub.

Rife put his experience in real estate to good use—not only was East End Market able to work successfully with the city, but Rife also convinced his banker that this endeavor was a good one. He was able to obtain a business loan, rather than having to raise money for a new startup.

East End Market community manager Heather Grove says that logistics, such as scheduling availability for the kitchen, have also proved challenging. Yet, this shows the level of demand for such a comprehensive facility.

Hipsters and yuppies alike are involved with the market in different capacities, says Rife. The objective, he says, is to move capital toward startup food businesses, which are born and develop at East End Market. “Orlando has a great tech startup scene, but there has not been a similar mechanism for the food scene.”

Advertising has largely been a non-issue for the business, as people involved with East End Market tend to be interconnected already, says Grove. Local restaurants, local chefs and local farmers know each other, and the food hub helps deepen these already existing relationships in addition to fostering new ones. Getting the word out about East End Market has depended on relationships and networking, in addition to social media efforts, she says.

In addition to new local efforts spurred by enthusiasm, activity and relationships at East End Market, conversations have also been started about related issues, such as environmentalism and sustainability. “The Hive”, for example, offers discussion and meet-up opportunities to assist people in educating and empowering others in sustainability issues.

The food hub-based energy has not only been contained in Orlando, either. Rife says that as word has spread about East End Market, a sort of sustainable, local foods synergy has evolved, resulting in affiliations with other organizations in Central Florida. Examples include Audubon Park Community Market, Winter Park Harvest Festival, Winter Park Urban Farm and Winter Garden Harvest Festival.

Most of the food and agriculture entrepreneurs who have found their way to East End Market are making enough money, according to Rife. “For many, it’s the first ‘big boy’ lease they’ve ever signed.”

And the sheer diversity of businesses at East End Market are a strength for the collective whole. “Unless all the businesses fail, it will operating as is,” says Rife. “The model is a self-sustaining, capital model. To an investor, it looks like a real estate deal.”

Rife is more than pleased with East End Market’s success since its inception, yet he retains a sense of flexibility and a willingness to adapt and evolve.

“We would love to see more,” he says. “We want to aggregate with more like-minded businesses.”