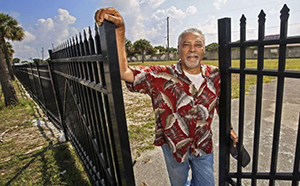 In West Palm Beach, 18.7 percent of the population lives below the poverty line, compared with 14 percent for Palm Beach county and 14.5 percent for the U.S. as a whole. The city is also home to a large proportion of the county’s 27 federally designated food deserts. Residents live in a stark contrast to the area’s natural abundance of fresh produce, with limited retail and transportation options to grocery stores.

However, this is all about to change.

“When I moved down to West Palm Beach from New York, I frequented a small take-out restaurant called Frederick’s Island Shack, and it was across the street from a vacant lot,” says Bosley. “It had been vacant for 12 years. The restaurant was selling greasy food; fried chicken, fried pork chops, fries and gravy and all that other stuff that tastes good, but is not good for you at all. So I looked at this vacant lot and said we need to grow a farm that has fresh produce.”

Around the same time Bosley moved to West Palm Beach, the city was starting an office of sustainability. In one of the first sustainability working group meetings, Bosley connected with the city’s Extension Director, Audrey Norman, who helped to connect him to the the resources he needed to get started on the farm. After a long process of land acquisition and jumping hurdles, the Urban Growers’ Community Farm, also known as the Henrietta Bridge Farm, is finally growing produce.

“What I didn’t realize is that it would take me four years to finally get site control,” he says. “Over the past four years, I have been steadfastly trying to acquire this property, clean it up, and put a farm on it. Now I’ve got 1,200 plants. We’ve got about 500 or 600 tomatoes, green peppers, kale, collard greens, bell peppers, and pole beans, and the first crops will be ready in January.”

Bosley hopes that this farm will produce fresh and chemical-free vegetables and eventually fruit for the residents who otherwise would not have access to these healthy foods. Because of the climate in Florida, the farm will be operational from September through May every year, growing and harvesting produce for an on-site farm stand and eventually a CSA for community residents.

“Where this farm is located is a perfect example of a food desert community,” he says. Where the growing center is now located, you have to go two and a half miles in any direction to get produce. The people that live in this neighborhood are all near or below the poverty line, and don’t have access to fresh produce. People who benefit from this are low-income seniors, and kids. It helps the people who don’t have access to fresh produce, many of them because of limited transportation options. The cost of transportation also has to be factored into the cost of the food.”

In addition to producing fresh and local produce for the community, Urban Growers is also providing job training and job opportunities to residents of the neighborhood, including previously incarcerated and at-risk youth. The plots were installed by previously incarcerated individuals from the juvenile justice system in Palm Beach county as part of a restorative justice program in West Palm Beach. Urban Growers hopes to continue supporting this population and other individuals from the community as they begin to harvest their first crop and expand their business.

“One of the people we hired has a felony record, so he’s had trouble getting a job,” Bosley says. “He has two years of horticulture experience, and has been an unbelievable help to us in getting this thing off the ground. He gets up early every morning to water the plants and tend to them. I hired another person from the community who is sort of like a neighborhood preacher, and I’ve got a couple of kids who come on the weekends and a couple of volunteers who come out on the weekends.”

Ultimately, Bosley plans to develop this farm and the surrounding area into a community food center. He has coordinated with the local elementary and middle schools to have students come paint a mural on the large 650-foot wall separating the farm from the train tracks within the next couple of months. The farm has also created a SNAP incentive program where customers paying with their SNAP food stamps get up to a $10 match on dollars spent, increasing the buying power of low-income customers

“Our plan is to develop this so that it’s a farm and a teaching instrument so people can learn how to grow,” says Bosley. “It’s important for young people to understand that food doesn’t grow at the supermarket, it grows in the soil, and we will teach them how to grow it.”