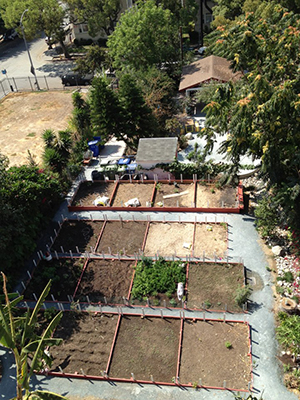 Founded in 2002, the LA Neighborhood Land Trust is a nonprofit organization that identifies underutilized space in a 475-square miles area in and around Los Angeles, and transforms it into green space for urban agriculture and community recreation projects.

Real estate costs are high in Los Angeles, so the work of the Trust moves forward one small lot at a time.

“Our little land trust is good with conserving half-acre properties and creating green space in a community that has never existed before,” says Mark Glassock, director of special projects for the Trust. “In terms of our acreage, we are quite small, but in terms of our impact and our reach in terms of population, I believe we’re actually very, very large.”

Since its inception, the Trust has fostered the development of 18 inner-city urban agriculture projects, with 11 projects in development. A recent projects include a food forest and community garden combination with child-centered programming in the unincorporated area of West Athens. The Trust hopes to build ten new urban green spaces in 2015.

“In many respects we’re returning to LA’s roots,” says Glassock. “California is one of the best places in the world to grow food, and we have a long history of agricultural production. What we saw in the middle of the last century was urban sprawl and the takeover of the city by the car, and how that’s really defined LA. I think the opportunity that presents itself to LA now is a return to saving space for healthier places.”

For the Trust, the purpose of holding land in trust for future projects and developing land for urban green space is about creating a more equitable urban landscape. For those people living in underprivileged neighborhoods, the drive to purchase fresh food is often laborious or beyond of their economic capacity, Glassock says. By creating inner-city green spaces, the LA Neighborhood Land Trust improves food security while increasing food justice in minority communities.

“There’s a very wide disparity between more affluent communities that have parks and community gardens with walking distance, and low-income communities like South and East Los Angeles, where it’s very difficult to access spaces that are safe, enjoyable and have great quality amenities,” says Glassock. Currently, the Trust has projects in South and East Los Angeles, North San Fernando Valley and at the city’s center in an area known as Korea Town.

Finding space was once a word of mouth process for the Trust, and the system proved inefficient and often wasted time. According to Glassock, the city of Los Angeles, with its many departments, can find it difficult to keep track of its real estate assets.

So the Trust, in partnership with other local stakeholders, started with a Transforming Inner City Lost Lots Project (TILL), which collected data on city properties and assessed them for future development. Because of this process, the city not only has a data bank on land for public reference, it has allowed the Trust to tag 400 city lots for future projects.

Glassock says the main factors considered by the Trust when acquiring or developing a property include a willing seller, whether the property is located in an underserved community and whether or not the local community supports the project.

The last piece is critical; the Trust has come up against community mistrust in the past, which has resulted in stopping or delaying potential urban agriculture projects.

“We work exclusively in low-income communities,” says Glassock. “A big part of the duty of working in these areas is to always work with the community so they are at the forefront of leadership on the site.”

Glassock says the Trust endeavors to work with communities to find solutions when they express resistance or mistrust.

“We take that ‘no’ as ‘no right now’ and continue to work with the community to talk about how the land trust process can build safer and better parks,” says Glassock.

Glassock says that while creating urban agriculture space in the inner city is not the easy work, it’s satisfying to be a part of building a sustainable future for LA.

“I think we are rising to the challenge,” he says. “We are coming together as a city very nicely and defining what we want to look like in the future. I think it’s a really powerful thing that is growing right now fairly organically.”