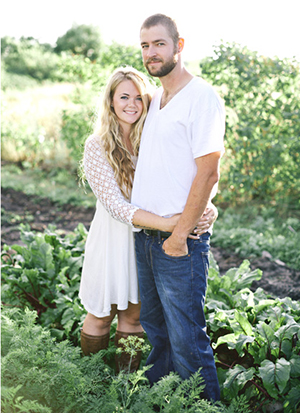 After graduating college, Hannah and Jonathan Moser learned the mechanics of CSA management while working on a vegetable farm in Australia. Then the couple came home to North Dakota and decided to give it a try for themselves, launching Forager Farm.

In a state with very few CSA programs in place, the concept of a local food movement remains a fringe idea. In order to promote and gain support for consumer supported agriculture in the region, the Mosers had to first educate people as to what the need. Using her storytelling skills and a degree in PR and marketing, Hanna uses the web as a platform for growing awareness in her community.

On her blog on the Young Farmer’s Coalition website, she writes about food policy and the many facets of modern sustainable farming. On Forager Farm’s website she shares her recipes, the story of the farm and the journey of the CSA. The social network has proved a great place to market the farm and local agriculture.

Hannah’s approach is to tap into the human side of local food.

“Imagine you’re sitting in a living room across from your best friend telling them about your hopes and dreams; that’s essentially what I try to do,” she says. “You have to somehow connect on an emotional level, otherwise they’re not going to be interested.”

As they plan for the coming growing season, the Mosers are debating whether or not organic certification for Forager Farm is necessary. She prefers to focus on the idea of “face certification” and creating a personal relationship between grower and consumer.

“We’re really torn on it,” says Hannah. “I’m leaning towards local. A lot of people aren’t going through the effort to become certified organic, because they know that if they can have that relationship with their members and customers, then that’s all that really matters. It’s so costly to get through the stress of being certified. Sometimes it doesn’t feel worth it.”

Hannah is the first to admit that after just a couple of growing seasons, she has much to learn about the world of farming and is constantly thinking of new ways to improve production and educate people on the need for decentralized farming and local food.

After some devastating flooding in June which taught the young farmers much about working with weather and being prepared, as well as continued research into the practices of Elliott Coleman, Hannah feels more confident about the upcoming year. Short-term plans include incorporating more intensive growing methods to keep the farm manageable without the need to employ additional help, as well as creating breads and other value-added products to increase the diversity of the products offered by the CSA. Long term, the Mosers’ goal is to launch a small goat dairy to offer artisan cheeses and yogurts for the local community.

To Hannah, age is far less important than drive when it comes to building a sustainable local food system.

“People that have enough drive to get it going and understand the importance of local and sustainable food,” she says. “It is those people that will drive local food.”

Q&A: Robert Egger on Food Security and the Aging Population