Q&A: Robert Egger on Food Security and the Aging Population 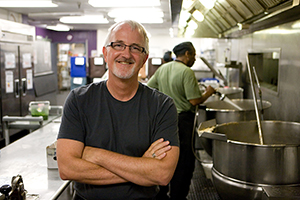 Robert Egger is the Founder and President of L.A. Kitchen, a culinary arts job training program for people coming out of foster care and incarceration. He also launched D.C. Central Kitchen, a similar effort, in 1989. L.A. Kitchen is currently in pilot phase and will launch in a new space in 2015. Read more about L.A. Kitchen in Seedstock here.

At the Seedstock Reintegrating Agriculture conference in November, Egger delivered a keynote in which he talked about waste, both in terms of food and human potential, and opportunity, in existing community resources and in the impending wave of older people who will be hungry in coming years.

Seedstock took some time post-conference to speak with Egger about these ideas and his community kitchen model, which has been replicated in over 40 communities across the United States.

Seedstock: At the Seedstock conference in November, you talked about the opportunity you see in the boomer generation that is now just starting to reach retirement age. Can you elaborate on that?

Egger: Right now, L.A. currently has over $10 million in contracts for senior meals, and a significant amount of that money goes toward processed food. A lot of the profit, we found, never comes back (to the local area). So our goal is to say, “Hey, here’s a model that will buy local, employ local, pay a living wage wage and reinvest profits over and over and over again in the city.”

From a business perspective, this is tremendous. The contracts now are worth over $10 million, but the number of older people in L.A. is going to double in the next 10 years, so potentially, the contracts could also double or even go higher, because right now, fewer than 10 percent of eligible seniors use the service. We expect that not only will the number of people increase, but so will the percentage of people using the service. 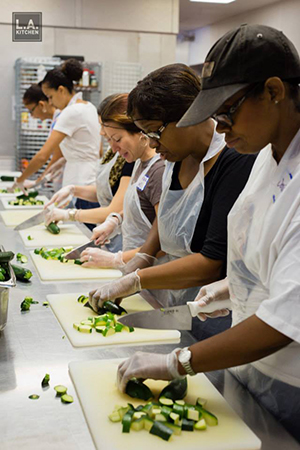 Seedstock: What role can municipalities and other public agencies play in helping to facilitate the local food system?

Egger: We believe we can potentially drive millions of dollars towards local farms, or even urban farms. Then, we we can start to suggest to mayors in in other cities that there really is a food economy worth exploring. You can link school food and local purchasing. In the case of L.A., where the city has a good food purchasing program, any city agency that spends more than $10,000 in food must make an effort to buy local. Then we can show that this can mean real money and real jobs.

Seedstock: You’ve worked on similar enterprises on both coasts. What are some of the similarities and differences in doing this work on the East Coast vs. the West Coast?

In L.A, we’re doing a lot right now all at once. We’re jumping right in. The one thing that is a little bit different is that California has more of a creative economy. People here are a bit more open to things that in other cities might seem crazy. That being said, people are still looking at the L.A. Kitchen, like, “Whoa, this is big, and you’re doing this fast.”

I don’t begrudge anyone who asks why we are starting so big here. Maybe I could have done a better job selling the idea, but on the other hand, you should not need an outsider to say “you have a tsunami of older people in poverty in your city.”

I know what’s coming, I am rolling into L.A. saying “there is a boat we must build, like Noah and the Ark.” I would love to build something smaller over 15 years, but I am trying to get out in front of the flood, because I can feel the first raindrops of the boomer downpour.

Seedstock: How is the community kitchen approach to poverty and food security different than traditional sources of community food aid like soup kitchens and food banks?

If you really studied the demographics, you’d know that the face of hunger is a single mom with kids, and she’s working one or two jobs. A lot of fruit and vegetables are going into the system, but the question is, are we getting the best value out of them in the current way we distribute, which is putting whole fruits and vegetables into people’s boxes and pantries? The question becomes, is this food really of value to that single mom? Does she have a place to store it? Does she have the time to prepare it? Does she have the cultural knowledge to prepare it?

The real value is in processing and stabilizing. Because time is that woman’s greatest resource. So say it’ll take two hours for her to prepare a meal, and it’ll be healthy, but where is she going to find the two hours? My approach is to say “here’s a bag, you open it, you pour it, it’s ready to go.” I think if you can process and stabilize the fruits and vegetables, and do it in a way that trains somebody for a job or actually employs somebody, are you kidding? It’s smart business for everybody.

I’m also dealing with scale here. We’re going to be dealing in tractor-trailers of stuff, and very few programs can process that kind of food that fast. What I want to do is freeze, refrigerate, potentially even dehydrate. The idea is to stabilize the product, not just move it down the line and hope something good happens. It’s a value-add center; basically, it’s making carrot sticks out of carrots, or salads or juices.

Seedstock: Is what you are doing replicable in other cities?

Egger: I’ve opened campus kitchens all over America, so this isn’t something new for me. My basic business model is to use existing resources, applied with a new formula to try and meet future opportunities, or offset future problems. I take all the things that we waste, and I use them in non-traditional orders. The first thing I did was take food society threw away. In previous kitchens, I used already existing kitchens, but because of the scale of the L.A. project, I had to build one.

My model is all basically about what’s already here and how to use it in a different order to get better results. So even though L.A. Kitchen is bigger, and it might be a little more expensive here because of what I’m building, you can do the same thing at a community college in a rural town.

This is what I’ve done all my life. There are forty-one colleges that have campus kitchens based on based on D.C. Central Kitchen. That’s just another variation of what I do; I create models that can work.

But I’m open-source, too, so I’m pretty open to this idea of “if I have anything, you can have it.” I don’t care. Take it, please. Adapt it. Do what you want to. I’ll help you with that. Just consider what I do, because what I try to do are things that are efficient, effective, impactful, profitable and respectful.