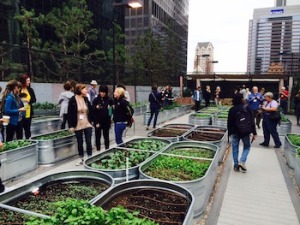 The growth outlook for land, production and jobs connected with urban farming was generated from Seedstock’s recent annual conference at UCLA where more than 250 farmers, entrepreneurs, policy makers, investors and others gathered to hear experts discuss current factors driving robust local food systems in dozens of urban settings across the country.

Direct to consumer local food sales via community supported agriculture (CSA), farmers markets and farm stands increased from approximately $600 million to $1.2 billion from 1997 to 2007. USDA estimates that farm-level value of local food sales totaled about $4.8 billion in 2008 (1.7 percent of revenue from all farm production) and are expected to continue double-digit growth into 2015 and beyond.

The top five trends or changes for urban and sustainable agriculture in the U.S. in 2015, according to Seedstock, are:

“As start-up costs go down and consumer demand continues to climb, the U.S. will continue to see many more people enter the field of urban, sustainable farming,” Puro said. “You also can’t overlook the significant societal change we’re witnessing – more and more young people are abandoning the typical office job or changing their career search to do something good for the environment. They are discovering they can make a decent living by growing food in or near urban areas on smaller plots.”

Another key to continued growth in urban, sustainable farming is education. Groups like Seedstock have become necessary to new farmers who need resources and networking. As highlighted in one of Seedstock’s recent articles, a variety of factors will determine whether an individual urban agriculture operation will be profitable.

“Smaller farms can face greater financial risks because their liabilities are not spread over as large an area as an industrial-scale farm, or they don’t enjoy the same economies of scale when it comes to purchasing supplies,” Puro said. “Those obstacles are beginning to fade as technology improves, more small farms emerge and entrepreneurs figure out the right business model. As a result, financing is becoming more available and profits are being realized.”