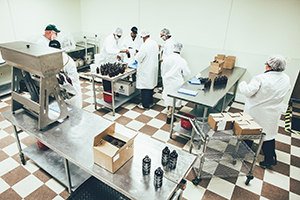 As the sustainable agriculture movement has flourished in the United States, so has the need to support the local food movement in concrete and productive ways. Hopeful Harvest Foods, an offshoot of the influential Forgotten Harvest of metro Detroit, is coming up with practical solutions to do just that.

Chris Nemeth, senior director of social enterprise for Forgotten Harvest and his partner Michael Szymanski, have developed several strategies to solidify the small food business infrastructure in Detroit while creating a template the rest of the country can follow.

Although Hopeful Harvest already has a commercial kitchen available, the recent growth in the local food movement has necessitated an expanded facility.

“We’re developing it into a one-stop resource for small food entrepreneurs in Detroit,” says Nemeth.

Hopeful Harvest’s expanded incubator facility will offer affordable kitchen rental that includes all the necessary equipment and storage space an entrepreneur could need. Plans include a cold storage facility, separate processing and canning area, and the latest in commercial kitchen amenities.

“We’ll hold their hand and help them grow their business,” says Nemeth.

Hopeful Harvest has only been in place for a few months, but already has 11 clients and is working with another 14 small business owners to bring them into the fold. The organization will help their clients with business plans, website development, bottling, packaging and labeling, and networking. The goal is to have 25-30 clients by the end of 2015.

In early spring of 2015, Hopeful Harvest’s first apprenticeship program will begin. The eight-week program will offer classroom education as well as hands-on training in the organization’s 125-acre farm located 40 miles from downtown Detroit. Students will help harvest two million pounds of fresh produce while learning how to become gainfully employed. Initial apprenticeships will focus on returning veterans and the those with barriers to employment, but Nemeth hopes to build the program quickly, recognizing the need for broad sustainable agricultural training in the urban setting.

“Metro Detroit has become a hub for small food entrepreneurship in the United States. It’s kinda like the Wild Wild West. There’s tons of opportunity here,” says Nemeth. “We’re branching out into areas we haven’t been before. We have an opportunity, if we do this right, to really help small entrepreneurs in metro Detroit.”

As well as all their other programs, Forgotten Harvest is partnering with fresh food companies in a co-labeling project and has begun developing its own food products.

To Nemeth, it’s all about rebuilding the community as much as the food system.

“Ultimately for a city to really come back you’ve got to bring the communities back, the little neighborhoods, the entrepreneurs, the storefronts and the people working out of their homes,” says Nemeth. “There’s so many people here that are on a mission. There’s a lot of creative organizations around and everybody just wants to help everybody. There’s this connection that everybody shares in. We’re gonna bring Detroit back.”