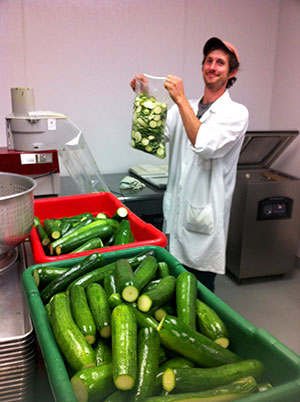 Regional food hubs have become all the rage in the past year among local foods advocates. These startups promote local food system development by offering aggregation and distribution services to farmers, food producers and vendors around the country.

The glowing media coverage they often receive for this and their increasing numbers suggest food hubs are an idea whose time has come. But can they survive in the long term?

Looking at the numbers, it’s clear the movement’s definitely developed momentum over the past few years.

According to the U.S. Department of Agriculture, their ranks grew 65 percent between 2009 and 2013, jumping from around 140 different establishments to over 230. The agency now identifies approximately 300 operating throughout the United States.

The USDA defines a food hub as “a business or organization that actively manages the aggregation, distribution, and marketing of course-identified food products primarily from local and regional producers to strengthen their ability to satisfy wholesale, retail, and institutional demand.”

While this provides a general framework, it’s important to remember there are no cookie-cutter formulas to building a food hub. For example, Vermont’s Mad River Food Hub operates a warehouse with produce and meat processing facilities, business incubation and truck delivery, while Red Tomato in Massachusetts focuses on sales and marketing, relying on contractors to handle aggregation and transportation work.

What links them together is philosophy. Food hubs work closely with producers in a relationship more akin to business partner than client. They’re also committed to balancing financial viability with a social calling to improve the well-being of their communities.

To assess the viability of the food hub movement, it’s helpful to understand why they’ve become so popular.

The term “food hub,” as it’s now generally understood, is a fairly recent addition to the popular vocabulary. Companies offering local aggregation and distribution services are nothing new, according to Rich Pirog, Senior Associate Director of the MSU Center for Regional Food Systems. But he says the phrase has only commonly been used to describe operations focusing on local source-identified foods for about five or six years. He ties this to the evolution of the local foods movement.

“Food hubs are helping to respond to a demand for larger volumes of local food to a wider variety of buyers who are attracted to reduced transaction costs of working with one source for their buying their local products,” he tells Seedstock.

In other words, there’s been an upsurge of interest for local products by bulk buyers like schools, hospitals and restaurants that’s made the work hubs do more economically appealing.

Despite their growth, many operations are launched and supported with outside funding. Unfortunately, this arrangement raises the prospect of a food hub bubble — of hopeful speculation breathing life into institutions that may not be sustainable on their own.

Glenda Humiston, State Director for USDA Rural Development in California has been working to spur the growth of food hubs in the Golden State. She’s excited about their potential, but doesn’t mince any words on her perspective on their current situation.

“Let me be real clear about this,” she tells Seedstock. “We have a real challenge with this. Most of the food hubs are having a really hard time functioning. It’s really hard for them to pencil out.”

Many food hubs have received startup funding from philanthropic institutions and the USDA, which has played a role in their proliferation.

“The availability of grant funding from USDA and to some extent from foundations has helped leverage financial resources for food hub development,” says Pirog. “This funding has also been available to study the profitability, efficiency and impact of food hubs in local and regional food commerce, which is very important in characterizing when and where food hubs may be a good option.”

A 2013 National Food Hub Study conducted by the Wallace Center and MSU found that 49 percent of 88 food hub operators relied on outside funding, with 17 percent of them being highly dependent on that money.

In an analysis of 45 hubs conducted in 2011 by the National Good Food Network’s Food Hub Collaboration, 60 percent of respondents said they used government funding to launch their operations and 30 percent said they currently used government money to meet their expenses.

Humiston says the USDA now has several programs to fund food hubs, including loan guarantees for for-profit establishments. Her agency helps in other ways too: financing feasibility studies, providing materials, facilitating research and bringing groups involved with the food system together to talk about the promise of food hubs.

“I actually think food hubs are a critical piece of the farm-to-fork infrastructure,” she says. “We desperately need them if we are going to change how the food system works.”

Food Hubs Bring a Smorgasbord of Services To The Table

Many times when people think of farm-to-fork, they conjure up pictures of farmers’ markets. While there are some similarities with respect to their emphasis on fresh, locally-sourced foods and regional economic empowerment, food hubs bring a whole lot to the table that a small market simply can’t offer.

Humiston cited a 2012 California Centers for Excellence study that concluded 181,000 jobs could be created in her state over five years by improving farm-to-fork activity throughout the value chain.

“If you’re a school district and you’re trying to source local food products, you can’t have 50 farmers backing up a truck with raw product at the cafeteria every morning,“ she says. “Somebody somewhere has to receive that and do just a little preliminary washing and sorting, instead of dumping them with apples.”

Along with its own Michigan-centered distribution service, Cherry Capital Foods in Traverse City Michigan has joined with a number of local groups to launch the Grand Traverse Foodshed Alliance (GTFA) innovation hub. GTFA plans to rent space to between eight to 10 different value-added food companies in a warehouse it shares with CCF.

As for the larger movement, Smith thinks food hubs in their different varieties, have quite a bit to offer local communities.

“Localizing the food system can provide fresher, seasonal varieties of many items and by keeping that money in the community and it will help to build jobs and infrastructure,” he says. “These models are not intended to replace the existing food system, but to complement and simplify it.”

Many food hubs are finding themselves hovering on the edge of viability.

Cherry Capital Foods has been growing at a rate of 50 percent a year for the past for years and projects that its 2014 sales will surpass $3 million.

“It’s not yet profitable, says Smith, “but getting close.”

As for the GTFA innovation hub, he expects a positive cash flow from rent once tenants finally get on board.

The 2013 Wallace Center food hub study evaluated the viability of 75 hubs based on a business efficiency ratio metric. Pirog, who helped conduct the analysis, told Seedstock approximately two thirds broke even or had sales that exceeded their expenses. And as noted above, 51 percent of 88 operators surveyed in that study said they operated without any outside funding, showing that it’s quite possible for food hubs to sustain themselves independently.

While this sounds promising, Pirog cautions that the survey wasn’t an intensive financial analysis of food hubs and stresses the need for more data to assess the circumstances and models where they are most appropriate and what it takes to make them profitable.

“Clearly increased sales and reduced transaction costs to improve cash flow is critical;  without positive cash flow, food hubs, like any other business, cannot pay their bills,” says Pirog. “We still have a lot to learn and need to be careful to not over-promote food hubs as a solution when we are not sure what the problem is.”

Based on experience in the field and USDA-backed feasibility studies, Humiston believes there’s some truth to the notion of a food hub bubble. She urges operators to experiment with innovation and points to her own agency’s work building resource-sharing partnerships between food banks and hubs as a possible way forward.

“We have to make these things economically viable or they’re not going to exist,” she says.

“There’s not enough grant money in the world to keep them going.”

Waste Not, Want Not: 7 Innovative Organizations Turning Excess into Aid