Waste Not, Want Not: 7 Innovative Organizations Turning Excess into Aid 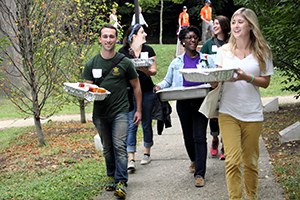 Virtually every major city has a food pantry to help the needy, but some food aid organizations are raising the sustainability bar by putting excess food and food waste to good use.

Many offer culinary training programs and others use algorithms to match excess food with those who need it, but the common denominator of the following organizations is that they turn food waste into food aid for those who desperately need it.

D.C. Central Kitchen in our nation’s capital not only recycles food to combat hunger, but assists the poor through culinary job training and uses social enterprise to rebuild food systems in the city. Since it was founded in 1989, more than 27 million meals have been prepared and served by D.C. Central Kitchen staff.

Founder Robert Egger grew frustrated with food aid that seemed to make volunteers and donors feel good, but did not do much to help the needy on a long-term basis. He resolved to use excess food, his very first batch of which came from leftovers from President George H.W. Bush’s inauguration. Presently, the organization has partnerships with multiple farms which provide misshapen and blemished (but perfectly good) produce.

Recently, Egger relocated to Los Angeles to lead L.A. Kitchen, which is still under construction. Like D.C. Central Kitchen, L.A. Kitchen will partner with wholesale produce companies and area farmers to obtain produce that would not otherwise be sold due to blemishes or other imperfections. All of this food will be collected at L.A. Kitchen’s processing facility, where employees and volunteers will transform it into meals.

But L.A. Kitchen will not only feed bodies, but also souls and spirits. A 15-week job training program will match young people recently out of foster care with older people recently released from prison. Instead of merely providing food, L.A. Kitchen will provide marginalized people thorough culinary job training, and will help cultivate meaningful relationships between young and old.

What do Gonzaga University, Johns Hopkins University, Washington University, Northwestern University, the University of Florida and a whole host of other colleges, universities and high schools have in common? They are sites for Campus Kitchens Projects, also a brainchild of Egger.

Campus Kitchens Projects partners with schools to utilize kitchen space and recover excess food from cafeterias to feed the hungry. Student volunteers prepare and deliver meals. A total of 42 schools are affiliates of the Campus Kitchens Project, which focuses on utilizing already-existing resources and student help to assist people in need. Its focus is not only on filling stomachs, but on transforming the world through partnerships and social change.

Feeding Forward, based in San Francisco, California, uses technology to match unused food with people who need it. Participating businesses and organizations can notify Feeding Forward, via its web site or an iPhone app, that they have excess food. An algorithm instantly matches this food with an aid agency that can put it to use. Feeding Forward then sends a driver to pick up and deliver the food. Currently, the organization only operates in the San Francisco area.

Oregon Food Bank, through its Fresh Alliance program, partners with grocers and food retailers in obtaining perishable food that is no longer sellable due to expiration date, but is still safe for consumption. Drivers of refrigerated trucks pick up donations five times weekly, and after volunteers inspect and sort the food, it is immediately delivered to various hunger relief agencies. In all, 279 stores in Oregon donate food through this program. The Oregon Food Bank operates throughout Oregon and Clark County, Washington.

In New York City, City Harvest takes both food rescue and food aid very seriously—it views both as interconnected. With its fleet of 19 refrigerated trucks and three cargo bikes, it expects to collect 50 million pounds of excess food in fiscal year 2015. An army of volunteers and full-time employees inspects, sorts and processes collected food in a 45,400-square foot facility in the borough of Queens. Close to 2,000 food donors, including restaurants and groceries, supply the excess food, which then goes to more than 500 food aid programs across the city.

Waste Not OC obtains donations of surplus food, and distributes this food to relief organizations in Orange County, California. Its Anaheim-Orange pilot program is designed to identify sources of excess food. According to its web site, out of 1,500 potential food sources, only a few even know that excess food can be used to fight the problem of hunger. Future plans include starting a culinary training program for students from the Orange County Probation Department.