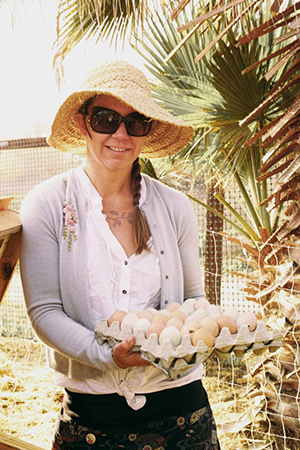 Sasha Kanno, president of and farmer at Long Beach Local, holds eggs that came from her farm. (photo courtesy of Sasha Kanno)

Southern Californian Sasha Kanno, 38, cares so much about where food for her friends and family comes from that she started a nonprofit biodynamic farm and training/education center in Long Beach, a Los Angeles suburb.

Prior to starting Long Beach Local, she directed Wrigley Garden, a community garden in Long Beach, and co-founded the Wrigley Co-op Food Exchange. Recently she received a Women’s Business Council small business grant for her work with Long Beach Local. She is a graduate of the American Community Gardening Association’s Growing Communities Workshop and is a supporter of Slow Food Los Angeles.

Kanno, along with a team of volunteers, grows specialty crops and flowers without chemicals or pesticides at Long Beach Local’s 1-acre farm, Farm Lot 59. The farm also has egg-laying hens and beehives. Not only does Kanno wants to provide her community with great-tasting, locally-produced food, she desires to teach farming to other urbanites and procure more agricultural space in the city.

“Before, there was not much food production in the city,” she says.

With the exception of gardening, Kanno was not exposed to agriculture during her childhood in Florida. Prior to her farming endeavors, she worked in the film industry. At first, Kanno spent a great deal of time gleaning farming information from the internet.

“I had a little Kubota tractor which I learned how to start by watching a video on YouTube,” she says, laughing.

Her growing enthusiasm also led her to attend EcoFarm, a small farm conference in Monterey, California. After speaking with others and learning even more, Kanno decided to start farming as a vocation.

From a distance, she viewed prominent Maine writer and small-scale sustainable farmer Eliot Coleman as a mentor. And she gained even more agriculture knowledge through trial and error. During her career of working in art departments in the film industry, she was used to long days. This has not changed now that she is a farmer; 7 a.m. to 7 p.m. days are the norm.

Kanno has also received encouragement from a fellow traveler on the sustainability journey, Long Beach resident and boat captain Charles Moore, who has written articles bringing attention to the vast amount of plastic debris in the Pacific Ocean. Moore was the founder of Algalita Marine Research Foundation in Long Beach.

Kanno has found success and loves her farming career, but she has encountered roadblocks along the way. The biggest obstacle: finding good help. Currently, Kanno can only pay laborers in produce.

“Labor is my biggest challenge,” she says. “It’s hard to find people who are experienced.”

Another challenge has been dealing with the bagrada bug, an insect pest first reported in California in 2008. It feasts on a variety of crops, especially organic ones, and reproduces prolifically.

“There’s no organic eradication,” says Kanno. “The first year it wiped me out. I literally cried.” The next year Kanno delayed planting, which helped control the pest with hot and dry soil conditions.

Despite insect pests and labor challenges, Kanno has persevered, and has gained the attention of prominent Southern California restaurateurs. Every Thursday, she hosts a harvest for chefs, whom she also works with to plan menus. She also operates a rooftop garden owned by Michael’s Restaurant Group, and supplies the group’s restaurants with produce.

Kanno’s primary future goal is to operate in the black, to have a steady positive cash flow. She would like to become financially stable enough that she can afford to pay employees, in cash instead of crops.