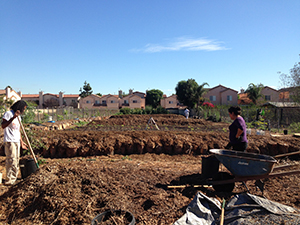 I arrive at the address I was given, but all I see, at first, is an empty lot, covered in weeds and blocked by a chain link fence. After a second look, I realize the place I am looking for is next door. I walk past the house at the front of the property, through a wide gate and into what at first glance appears to be a sea of mulch.

It’s 8:30 a.m. Tony de Veyra and Rishi Kumar, the managers of the half-acre plot, have already been at work for two hours at Ethan’s Farm.

I came prepared to work, so after introductions to Manju, Rishi’s mother and her friend Angel, we all begin pitching shovelfuls of mulch into buckets to spread between planting beds. The mulch is as much as a yard deep in places, forming berms and swales interspersed with the beds.

Sheet mulching is central to the tiny farm’s strategy, Tony explains. It’s all about building healthy soil. With the help of microbes, the mulch will decompose over time into dark soil, rich in organic matter. On top of this base, Tony and Rishi have added planting mix and manure.

Along the northern fence runs another berm planted with moringa and papaya trees and dotted with small ponds to provide habitat for beneficial insects. At the back of the property sits a small, established orchard, which is in the process of being transformed into a multi-story food forest. In a few years the young papayas will shoot past small peach, plum and avocado trees. Their light canopy will provide relief from the burning heat of summer without shading out the trees below. At ground level, there is a lush carpet of field peas, daikon radish and mustard, punctuated by the occasional sunflower. Every plant in the system serves a purpose: peas deliver nitrogen to the soil, sunflowers bring pollinators and daikon radish digs deep to loosen up the soil and give healthy microbes room to breathe.

The project began in August. The property owner had previously let his friend Randy Bekendam of Amy’s Farm take over management of the unused land, which Randy passed along to Rishi and Tony. Their early investments are cushioned by participation in a profit-sharing co-op with Amy’s Farm and several other small operations. The vision: to create a highly productive, diverse farm in a suburban setting, centered on building rich, healthy soil to grow the most nutritious food possible.

“If we ever get to a farmers’ market,” Rishi says, “I want to go with a soil sample to show people what the difference is.”

But it’s not just about the food.

Neither Rishi nor Tony is new to the world of farming. Rishi studied computer science but after college had a realization about working in tech. “I was like, hey, this sucks!” he laughs. After his epiphany, he focused on healthy eating and started gardening. He “learned what the word ‘organic’ meant,” traveled briefly, farmed in India and eventually returned to establish the Growing Home.

Rishi and his family have been running (and living in) the Growing Home, a suburban house in Diamond Bar re-imagined as a “model for sustainable living” and small urban farming, since 2011.

Tony is a recent graduate of the Cal Poly Pomona School of Agriculture. Originally a political science student, he found himself interested in the unrecognized ways that agriculture effects society, “like the subtle, filter-down effects of corn subsidies or soy subsidies, or us having less crop insurance for vegetables, fruits, things like that.”

He eventually switched his major to plant science and went to Cal Poly Pomona. Now he works at Neff Ranch, a small operation in Orange County but, like Rishi, devotes two days a week to Ethan’s Farm.

“I would like to hunker down on one project once it starts making money. But I do love advising,” he says, and sees himself being involved with educational work at some point. “But you have to build a model, to have something to teach from.”