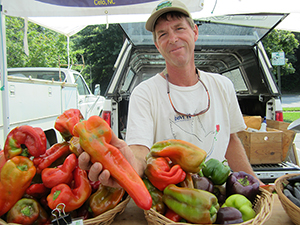 How do you create a thriving, sustainable local food system?

According to Charlie Jackson, the executive director of the Asheville, NC based Appalachian Sustainable Agriculture Project “you’ve got to jump in and start doing it.”

This is precisely what Jackson and a group of fellow volunteers did in 1999, when they began to develop community programs aimed at protecting the farming economies of their western North Carolina communities. Their efforts were so successful that now, 15 years later, ASAP has developed into an model for communities across the United States looking to invigorate their farming economies and improve public health and vitality.

ASAP began as a response to changes in the tobacco industry and agricultural trends favoring bigger farms. The program’s founders predicted these changes would be difficult for farming in mountainous communities such as those in western North Carolina, where the size of farms is constrained by the landscape. Explains Jackson, “What we needed was a homegrown solution, one that was going to work here for our mountain communities. And that was  ‘local.’”

ASAP’s initial volunteers took to the streets, the newspapers, and the airwaves, creating a buzz for local products. Says Jackson, “When it comes to promoting local food, I’ve found the public almost always says, ‘I’m in. Where do I find it?”

With this in mind, one of ASAP’s first initiatives was to create a Local Food Guide and provide a weekly “Fresh at the Farmers Market” report, first through the local newspaper and then on the local public radio campaign, to highlight crops as they became available at farmers’ markets throughout the growing season. ASAP’s early volunteers also reached out directly to the public, talking to farmers, setting up tables at farmers markets, and seeking out local restaurant owners and grocers.

What began as a volunteer program quickly grew. By 2002, ASAP was a recognized organization with non-profit status. The project still runs a local food campaign and publishes  the Local Food Guide – ASAP has printed over one million copies to date. It also oversees the “Appalachian Grown” program, which offers certification to local farmers, restaurants, distributors, and grocers.

As a reflection of ASAP’s core values, the Farm to School programs focus on schools with a high percentage of students receiving free or reduced lunch.

“It’s really important to ASAP that a just food system’s going to include everybody,” says Jackson. In order to expand the reach of their programs, ASAP also works with large grocery chains, programs for senior citizens, and the SNAP program.

In discussing ASAP’s success, Jackson is quick to give credit to the local farms and entrepreneurs he works with, noting that ASAP’s approach is to let the community lead. As Jackson points out, letting the community lead means that problems with infrastructure are minimized.

“Infrastructure impacts the price point and makes it hard for farms on a small scale to compete,” Jackson notes. “Investment in infrastructure develops when demand and support is there. What we’ve found here is if we can get more of the community to engage with the farms, we have amazing entrepreneurs who can start filling in that infrastructure niche.”

This includes a growth in restaurants, processing, and distributing, as well as other businesses. Jackson sees this as crucial to any community hoping to revitalize its agricultural base. “When infrastructure gets in front of demand, it can fail,” he says.

As western North Carolina’s agricultural economy has grown, Asheville emerged as a cultural hub, not just for the south, but for the entire country. Witnessing this, Jackson and his cohorts see broader implications in what began as a loose organization of community minded volunteers.

“Right now, we’re thinking about this as a movement,” says Jackson. “Focusing on local is an amazing way to create community dialogue and democracy that we don’t have in our food community right now.”

To explore how to create broader change through a local food system, ASAP has established a Local Food Research Center, which analyzes the impact programs such as theirs have on the economy, the environment, and public health.  ASAP also consults with other farming communities seeking to develop local food initiatives, helping each community identify programs to meet their unique needs.

“One of the things I’ve said over and over again is the idea that we’re really facilitating something,” says Jackson. “We’re not going into it with the assumption that we’re creating something.”