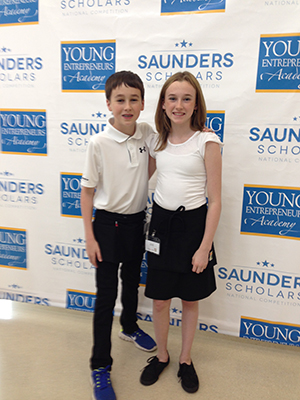 Eve and Liam Knight, also known as The Spice Kidz, excelled in a series of young entrepreneur competitions sponsored by the Young Entrepreneurs Academy. (photo courtesy of Liam Knight)

Eve and Liam Knight of Gulf Breeze, Florida moved to the United States from Ireland when they were 7 and 9 years old, respectively. One of their biggest culture shocks? Getting used to American food.

The siblings addressed this problem by starting their own curry business. The brother and sister team became The Spice Kidz.

Five years later, the Knights have not only spread the gospel of great-tasting and healthy curry among their classmates, but they also have a burgeoning business.

Culinary skills run in the family—their mother attended culinary school, and their grandmother in Ireland made curry often.

“In Ireland, a lot of people eat curry,” says Eve. “We found in the United States, some people didn’t know what it was.”

Their business focus is on providing spice packets for easy-to-make curry. They obtain their spices, direct from India by way of a wholesaler in New York City.

“We only buy the freshest and highest quality spices, 10 pounds at a time,” says Eve.

Once the Knights determined they wanted to start their own curry business, they realized there was quite a bit to learn. So they got up to speed at the Young Entrepreneurs Academy, which is run by the Greater Pensacola Area Chamber of Commerce and the University of West Florida Business School. They learned some important business skills.

“Writing the business plan was pretty hard,” says Eve. “Getting in front of people and talking is nerve-wracking.”

But perhaps the most important business acumen they learned was discipline.

“We sat down and made (spice) packets, even though we wanted to do something else,” Eve says. They did this for an hour every day. In addition, they took a business class that met every Tuesday night for three hours.

Before long, however, the duo’s efforts began to pay off. On March 14, 2014, they won a local business competition on ABC’s “Shark Tank.” In May, they advanced to the state competition in Boca Raton, and won there also. From there, they went on the finals, held in June at the U.S. Chamber of Commerce in Washington, D.C. and placed third. Both Eve and Liam won $40,000 college scholarships from their achievement.

“This was kind of shock,” says Liam. “I did not expect anything like this.”

The Knights’ see the unhealthy fast food that is such a popular staple among many American young people as unsustainable when it comes to health. But curry is healthy and delicious, they say, and Eve and Liam use only the freshest ingredients.

Their web site proffers numerous tips on cooking with curry, including this one stressing health and sustainability: “The best coconut milk has a creamy waxy later and a clear runny layer. If your coconut milk is a consistent color/texture throughout, it has been more processed and is therefore less healthy.”

Despite their rapid success success, Liam is not ready to slow down. He wants to add a UPC code to Spice Kidz products, and is interested in obtaining insurance for the business. In addition, he wants to increase the online presence of The Spice Kidz.

The Spice Kidz does not currently pay for advertisements, but due to local sales and word of mouth, business is good. “We’ve sold quite a few spice packets,” Liam says.

Several local stores in downtown Pensacola, Florida sell The Spice Kidz spice packet. Those who don’t live in or near Pensacola who are interested in purchasing spice packets, may visit The Spice Kidz web site to find contact information for Eve and Liam.