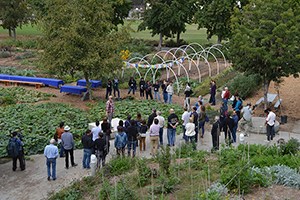 Participants at the two-day event, held November 11-12 in Los Angeles, toured a rooftop farm atop a storied private club in downtown Los Angeles, an urban farming operation at a Pasadena high school, a food production business incubator in the Lincoln Heights neighborhood, and an aquaponic shipping container farm in the city’s arts district.

A.G. Kawamura, former secretary of the California Department of Food and Agriculture, and Robert Egger of L.A. Kitchen delivered the two keynote addresses. Kawamura spoke of not only what needs to be fixed in agriculture, but also of the many things that agriculture has done right to provide a consistent supply of safe and healthy food. He said, “food is a privilege, not a right,” stressing the importance of sustainability, especially in times of extreme drought. Egger spoke of the power of food, and told the story of how L.A. Kitchen will not only provide food for the poor, but opportunities, which are far more important.

Michel Algazi of Food Centricity, Erika Block of Local Orbit, Dwight Detter of Whole Foods Market and John Mesko of the Sustainable Farming Association joined Kawamura on a panel discussion about how to foster an economically robust local food future. Block emphasized the importance of following a map, rather than a script, to remain dynamic. “This allows for flexibility,” she said.

Glassock listed three important issues that demand strong urban agriculture policies: displacement, blight and water. He pointed to Detroit as a great example of a city that is working hard to address all three challenges at once.

Profitability and the social value of urban agriculture was addressed by a group of panelists including Sasha Kanno of Long Beach Local, Nurit Katz of UCLA’s Sustainability Office, Rickey Smith of Urban Green, Mud Baron of Muir Ranch at John Muir High School and Dan Allen of Farmscape.

“You’ve got to broaden your idea of what urban agriculture is,” said Smith. “It’s about citizens and cities.”

Alluding to the need for better policies, Katz, who is UCLA’s chief sustainability officer, lamented the difficulty in trying to purchase local food from an institutional food service perspective. “UCLA is trying to buy sustainable food, but it’s not easy,” she says. “There’s a price premium because subsidies are in the wrong place.”

Baron would like to see a greater value placed on agriculture education. “Folks that work with their hands are not valued in our education system or economy,” he said. “Career tech education is a stepchild.”

If agriculture is going to thrive in urban environments, much of the production will need to take place in controlled environments, especially in cold-weather climes. A group of panelists, including Eric Ellestad of Local Roots, Colin Archipley of Archi’s Acres, David Rosenstein of EVO Farm,  and Erik Oberholtzer of Tender Greens talked about the commercial viability and scalability of hydroponic, aquaponic and and various other controlled environment agriculture systems in urban environs.

One of the keys to success in hydroponics and aquaponics is to build strong relationships with chefs, as well as marketing to people who don’t think much about food, Rosenstein said. Archipley says, customers value seeing the face of the farmer who produces their food.

Trice said it is important to get sustainable and urban farmers to think more like businesspeople. Tse takes this a step farther, because the existing agriculture business model assumes a large supply of low-cost, unskilled labor. “This is changing,” he said, warning of a significant agricultural labor shortage in the years to come. Precision agriculture is the future, Tse said, and drones will play a huge role in agriculture in that future.