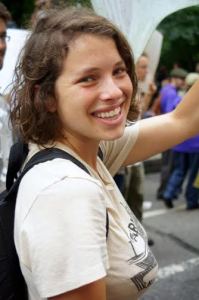 If you want change, you need passion to make it happen. Sophie Ackoff, who works with the National Young Farmers Coalition helping young farmers help themselves, has bushels of it.

As the coalition’s national field director, she travels the country bringing together folks who are beginning careers in ranching and agriculture to organize for a better environment to do their vital work.

“At NYFC, we believe there should be fewer barriers to starting a farm business in the United States,” Ackoff tells Seedstock. “As a coalition of farmers, we are identifying the barriers we face, fighting for the policy changes we need, and bringing farmers together, in person and online to learn, to share and build a stronger community.”

Along with its mission of supporting the next generation of U.S. farmers, NYFC encourages diversity in the profession and promotes sustainable farming techniques and fair labor practices. With chapters in 27 states and developing ones in 11 others, the coalition now boasts an impressive farmer and consumer network of 1000 members, 14,000 supporters, and 37,000 Facebook followers.

All of this has kept Ackoff busy.

Since joining the coalition’s team in 2012, she’s worked one-on-one with farming leaders around the country, helping to launch chapters in 26 states and organizing with members in all fifty. Her job also includes managing membership and corporate partnership programs, representing the coalition at events and working with NYFC’s policy analyst to plan campaigns.

At 25, Ackoff is no stranger to activism. She grew in Claremont, California, a former citrus-growing center near Los Angeles. Early experiences seeing monocropping and confined animal operations in California’s Central Valley inspired her to work for change. At Claremont High, she served as president of the Animal Welfare Club, working on issues like expanding elephant enclosures at the Los Angeles Zoo.

Her love of farming germinated while studying Biology and Environmental Sciences at Wesleyan University in Middletown, Connecticut. At Wesleyan she launched WesFRESH, a food policy group dedicated to increasing local foods on campus. Later, she became involved with the university’s student-run farm and managed it during her last summer there. She says that working with the earth helped her discover farming as “an incredibly proactive way to make a difference in the food system.”

From there, Ackoff went to New York’s Hudson Valley. In March of 2012, she began an apprenticeship with the Glynwood Institute for Sustainable Food and Farming, growing food for a 100-family CSA. The valley is also home to the NYFC and, according to Ackoff, a “young farmer hotspot,” so it wasn’t long before she dived headfirst into activism.

Ackoff met NYFC director Lindsey Lusher Shute at a meeting of the Hudson Valley Young Farmers coalition, and they soon began planning a regional farmer’s forum that brought federal and state representatives together with roughly 100 farmers in August of 2012.

“It was an incredible opportunity for young farmers to stand up, tell their stories and share

their needs with their elected officials,” she says. “Shortly after the forum, I started working full-time for the coalition. It took two more years, but we won important changes in the 2014 Farm Bill for young, diversified farmers.”

These changes include winning funding for farmer training programs, a permanent microloan program, and expanding the Agricultural Conservation Easement Program to include “farm viability,” which helps direct government funding to land trusts to ensure greater affordability.

In just four years, the group’s made some impressive headway. Although she credits much of this success to the local chapters, as national field director Ackoff definitely deserves kudos.

In addition to Farm Bill advocacy, the coalition’s worked to make USDA programs more accessible to its young constituency. In March, for example, it helped bring modifications to the Farm Storage Facilities Loan Program, expanding a focus on commodity grain storage to include wash and pack stations for vegetable and fruit farmers.

On the legislative front, the coalition is launching a campaign this month to add farmers to the Public Service Loan Forgiveness Program. NYFC’s social gatherings have also brought young farmers together at the local level, forging connections that have led to business partnerships, buying clubs, equipment and labor sharing, cooperative marketing, and other mutually beneficial undertakings.

All this work couldn’t come at a better time. Ackoff eventually wants to start her own vegetable farm with her partner Andrew, but right now—with the average age of the American farmer hovering at a distressing 58 years—she’s doing everything she can to bring more fresh faces to the profession.

“Thanks to the organic and local movements, young people are motivated to pursue careers in agriculture,” she says. “It’s critical that these new farmers find success in their new businesses. The future of our food depends on it!”