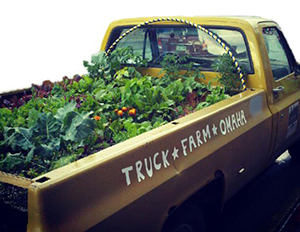 From coast to coast, 20- and 30- something adults are ditching their power suits and ties for shovels and seeds. From novice upstarts to young farmers carrying on a family legacy, we’ve rounded up some inspiring, young farmers, farming duos, and teams who are leading the charge in sustainable farming.

Dan Susman, Andrew Monbouquette and Chelsea Taxman of Truck Farm Omaha are dedicated to teaching local kids about gardening. The young farm founders knew, though, that the only way they could really get kids’ attention was to make their gardening presentation interesting. That’s why Susman and Monbouquette knew they had to replicate the unique, roving farm they saw while filming “Growing Cities,” a documentary about urban agriculture. During the duo’s filming travels, they saw Truck Farms from Portland, Oregon. When the farmers returned home, they started Truck Farm Omaha, a mobile gardening program that resides in a 1975 Chevy pickup’s truck bed. Chelsea Taxman joined the duo in March 2012 and the program was officially founded on April 1, 2012.

Arthur Kidd Robson founded Robson Farm, in central New Jersey in 1932. Originally, the farm produced dairy but now produces fruits and vegetables. While the farm originally had 1,200 acres, it currently resides on 40 acres, three of which contain peaches. The family sold the excess land in 2006, when Rose Robson’s grandfather passed away. That’s when Rose took the helm of the farm. She’s now a 27-year-old, fourth generation farmer.

At first, Rose didn’t plan on working the farm.

“I left the farm and headed down to University of South Carolina for college and took a few jobs elsewhere, but farming is somewhat genetic,” Robson writes on her Farm’s FAQ page. “I am also an only child and did not want something so special to end with me. I never thought I’d return to the farm until my dad passed away while I was in college… then it was the only thing I thought about.”

Sparkplug Farms is managed by Sara Hodges and John Wright in Vinalhaven Island, Maine. For three seasons, the farm has produced free-range eggs, milk and vegetables. The vegetable farm resides on 30 acres, but not all are in production. The farmers’ supply goods to the island, sell through a CSA and via several other venues. The farm’s cattle are raised on a pasture system, which involves rotational grazing, and are used to provide milk and beef. The free-range chickens reside in a mobile coop for protection at night and live on fresh pasture by day.

Sara Hodges, from Center Tuftonboro, New Hampshire, and John Wright, from Nelson, New Hampshire, graduated from Warren Wilson College, neither having studied agriculture, and apprenticed through the Main Organic Farmers and Gardeners Association http://www.youngfarmers.org/introducing-sparkplug-farm-vinalhaven-island/. Both of the farmers love providing fresh produce to the island’s year-round population, which has about 1,000 residents. The small size of the community allows the farmers to really concentrate on what the community wants to eat.

Diamond Hills Farms’ founders describe themselves as “two oddballs, who realized they had a common life plan.” Farmers Lori and Jason were able to start a successful farm in Columbia County, New York, now in its second season. The duo hatched the idea for the farm during an annual camping trip to in Brooklyn, New York. During the trip, the duo discussed how they weren’t enjoying their work lives and wanted to work the land.

While Lori originally wanted a ﬁber farm, and Jason wanted a vegetable farm (similar to what his Polish grandparents did), the duo soon realized that they had to learn how to farm first. With that realization, the farmers began looking for farming apprenticeships and land.

Within six months, the pair secured 80 acres of fenced pasture with a 10-year lease in Claverack, New York. The pair finally decided to focus on livestock farming. Their goal is to raise healthy, humanely raised plants and animals, to educate the public about their farm and build relationships with other farmers and consumers.