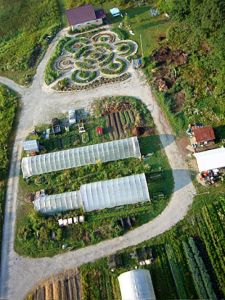 Here are 5 farms across the nation where students are working, learning and experimenting in sustainable food production.

Four to 6 student interns take the lead. A faculty farm advisor, Dr. Ed Durner of the School of Environmental and Biological Sciences, helps to coordinate their efforts.

In addition to supplying shareholders, produce is donated to local organizations that distribute it or make meals for low-income residents.

A decade ago, the future-Jones farm was almost sold to developers. Oberlin students and community members successfully petitioned the school to keep the land as a natural preserve and soon after that a low-impact organic farm was established and integrated into the landscape.

Now, the 70-acre Jones farm and nature preserve is still owned by the college but leased and operated by the New Agrarian Center, a local farming non-profit organization. Farm director Brad Charles Melzer calls  the farm as “a beautiful patchwork of cultivation fields, livestock pens, wetlands, woods, prairie, and ponds,” with a variety of traditional and permaculture-inspired growing systems. Students intern, work, and occasionally live at the farm.

The farm provides fresh produce to local communities in need and composts dining hall waste. It exists, says Melzer, “at the intersection of food justice, social justice, and environmental restoration,”

At Central Carolina Community College, the farm is a classroom, says Professor Robin Kohanowich, coordinator of the college’s Sustainable Agriculture program. The entrepreneurship-focused program teaches skills to create farms that are both financially and ecologically sustainable. Each season crops appropriate to the North Carolina climate are grown as a model for the students, many of whom go on to start their own farms.

The farm is also the site of biology course excursions and a source of high-quality fresh produce for the college’s culinary program. The farm is integral to the community.

Initial opposition by the college administration to the Pomona College Organic Farm quickly faded as it developed into a rich, cultivated landscape frequented by both students and community members.

The Pomona Farm continues to be predominantly student-run. Farm manager Naira de Gracia, herself a recent graduate of the college, describes the farm as fertile ground, so to speak, for student ideas and exploration.

“That’s the whole point of the farm; to invent and innovate and experiment,” she explains. Current student projects include making comfrey-based fertilizer, brewing compost tea and constructing an arbor.

Students have gone on to become small-scale farmers, landscapers, food justice and farm activists and homesteaders. De Gracia says, “I’m always discovering new alums who have done something awesome, who say they only were able to do this because of the farm.”

5. The CASFS Farm and Alan Chadwick Garden at University of California, Santa Cruz

Started as a teaching garden by a professor in 1967, the student-run farm at UC Santa Cruz has grown into a full academic program in the form of the Center for Agroecology and Sustainable Food Systems (CASFS).

Aspiring farmers who are admitted to the college’s prestigious Apprenticeship program live on the farm for a full six months, are immersed in farm work and learn how to build healthy soil, control pests and run their own CSA programs.

Graduates of the program include Karen Washington, the “Grande Dame of Urban Farming” and recent recipient of the James Beard Leadership Award for her urban farming and activism in New York City. Other apprentices go on to start organic farms, work with youth and urban gardening projects and work internationally in sustainable agriculture.