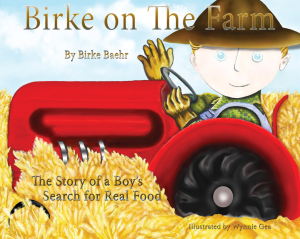 When Birke Baehr was 8 years old, he read about the possibility of high-fructose corn syrup containing mercury and grew alarmed, and curious. His curiosity led to further research about the health of foods produced through conventional agriculture. The more Baehr learned, the more he became convinced that he needed to tell others of what he was learning.

Wanting to get his message across to younger readers, Baehr wrote a children’s book titled “Birke on the Farm: The Story of a Boy’s Search for Real Food.”

In 2010, at age 11, Baehr spoke at a TEDx Next Generation event in Asheville, North Carolina. His speech was titled “What’s Wrong with Our Food System?”

Baehr grew up in the suburbs of Knoxville, Tennessee, and has since moved with his family to the Asheville, North Carolina area—a place he describes as having “a great local food scene.” His only agricultural endeavor prior to starting his writing and speaking adventures was a small garden. This, along with his age, proved to be obstacles in the path of spreading the word about health, good food and sustainability.

“Large (agribusiness) companies discredited me because I was young,” says Baehr. “But I’ve gotten through that now.”

The question that propelled him as an 8-year-old was: Why is there something that can kill us (mercury) in food?

Through his research, Baehr learned about genetically modified crops and food industry monopolies. As he became more and more convinced that the nation’s food system is broken, he wanted to share this message with his peers.

But there was a reason other kids his age did not know about such problems. “There was no kid-friendly material,” Baehr says. “I had to look up words to see what they meant when reading about agriculture.”

When he gave his 2010 TEDx speech in Asheville, he was the youngest speaker at the conference. He remembers thinking that he would have been happy with 200 internet views of his presentation. He never dreamed it would go viral. Since then, Baehr has spoken all over the country, as well as in Russia and Italy, about the need to change food systems for the better. He continues to travel across the country, delivering his message.

Baehr’s most important role model, at least for how to farm, is Joel Salatin of Polyface Farm in Swoope, Virginia. Salatin, who is famous for his dependence on grass, sunshine and  the cooperative work of farm animals, made a significant impact on Baehr when he first read about him.

“I thought, ‘Why doesn’t everybody farm like this?’” Baehr says.

Since then, Baehr has met Salatin and visited Polyface Farm several times, even working there for a day.

Baehr is also a contributor to a book titled “Future Chefs: Recipes by Tomorrow’s Cooks across the Nation and the World”. His story was included in an anthology, “Stand Up! 75 Young Activists Who Rock the World, and How You Can, Too!”

College is a possibility for Baehr, but regardless of whether or not he furthers his schooling after he turns 18, he plans to continue educating the public about food and agriculture. Additionally, he would like to homestead and have a farm of his own.

And, now that he is older, Baehr would like to write an adaptation of his children’s book, one for an adult audience.

Ultimately, he wants to fight a system of agriculture that he feels often seems to put profits ahead of health and taste. “Companies have so much power and money, and misinformation specialists are on their payrolls,” he says. “But, we have science behind us.”