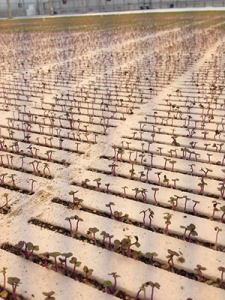 Indoor farms are the new and innovative way to grow greens. Modern indoor farms are quite large and filled with state-of-the-art technologies – they aren’t the tiny greenhouses of yesteryear.

We’ve rounded up five, indoor farms to give you a taste of what some of the most innovative growing organizations are producing.

All of Bright Farms’ facilities use hydroponic growing methods, which conserves water and produces high yields. Bright Farms’ greenhouses also are ideal for rooftops because they are lightweight. Pests are controlled with Integrated Pest Management.

Gotham Greens resides in Brooklyn, New York, but it has helped many urban agriculture programs across the United States get their start. Gotham Greens’ specializes in building, designing and operating commercial-scale greenhouse facilities that reside on rooftops. The produce is grown using hydroponic methods and pests are kept at bay with biological controls.

Three bright minds helm Gotham Greens: Viraj Puri, Eric Haley and Jennifer Nelkin Frymark. And while the idea for Gotham Greens was hatched in 2008, it wasn’t until 2011 that the organization built its first greenhouse in Brooklyn’s Greenpoint neighborhood. Now that original facility is able to harvest over 100 tons of produce all year. In addition to the organization’s original facility, Gotham Greens also has greenhouses in two other locations (one other in Brooklyn and the other in Queens) and plans on adding more locations in New York, and beyond. In fact, on October 7, Gotham Greens announced that it’s partnering with Method “to build the world’s largest rooftop farm in Chicago.”

In addition to only growing and distributing locally, it also packages locally and uses local suppliers. (The organization’s packaging uses “over 90 percent plastic” compared to other companies’ packaging.) All of its packaging is printed by Green Printers, which uses soy based inks. So far, Farmed Here produces baby arugula, kale and watercress, basil, mint, petite salad greens, and sweet basil vinaigrette.

Green Spirit Farms LLC has operated from its New Buffalo, Michigan location since 2012. The Farm resides in a 40,000 square-foot industrial building. The organization (with the help of Omega Garden, a rotary hydroponic system) grows using units in a multi-level system (Rotary Vertical Growing Station) and a multi-level tray system (Vertical Growing Station). Green Spirits Farms’ process allows it to harvest several times a year. The organization went with this approach to provide local produce to the area, and to help reduce “transportation and supply chain management costs.” The organization also grows its produce with renewable or carbon neutral energy, and doesn’t use pesticides. Also: The Farm reuses 95 percent of its water. The company sells its non-GMO produce at local grocery stores and restaurants.