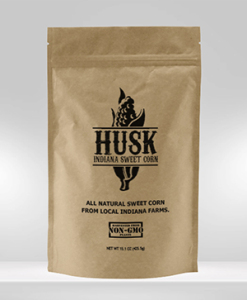 That sweet corn at your nearest supermarket chain probably was not grown locally. In all likelihood, neither were the green beans, lettuce or apples.

Husk is trying to change that. With headquarters in Greenfield, Indiana the startup is aiming to make sure locally-produced food at supermarkets and not just farmers’ markets.

Founded in 2013 by Nick Carter, Adam Moody and Chris Baggott, Husk is is creating a local foods system, complete with farming partners, a processing and distribution facility, and store. Only local farmers grow produce for Husk, and Husk products only sell at local and regional markets.

Currently, Husk uses only Indiana farmers and only sells to retail outlets in or near the Hoosier state (including Iocations in Illinois, Michigan, Ohio and Kentucky). Its three founders would like to expand Husk to other states, using only local farmers from those states.

The three founders are all entrepreneurs and run other businesses individually. Carter founded Meat the Rabbit, a sustainable farm-raised rabbit and quail operation; Moody founded Moody’s Butcher Shops in Central Indiana; and Baggott was the founder of Tyner Pond Farm, which specializes in pasture-raised pigs, grass-fed cattle and pastured chickens. In spring 2013, the three agricultural entrepreneurs began Husk.

“Everybody loves local foods,” says Carter. “But less than 1 percent of U.S. food is locally-raised. Why is this? How do we solve this?”

Carter says the key is food preservation, especially in regions of the country where the growing season is limited due to weather, like Indiana. Husk preserves food at its processing facility near Indianapolis. At just under 5,000 square feet, it is home to freezers, cutting machines and other specialized equipment.

At first, one of their biggest barriers to success was difficulty finding equipment. And, all three had to be quick studies in their new business.

“There was a learning curve on the product itself, especially super sweet corn,” says Moody. “It blanches and freezes quicker than normal industry corn, and has a tendency to turn into alcohol.”

Another potential obstacle was access to capital, even though, as Carter notes, the No. 2 industry category for venture capitalists is agriculture (No. 1 is technology). However, investors who are used to quick turnaround on their technology investments aren’t used to having to be more patient with agriculture.

Husk’s marketing efforts are centered on social media, which is much less costly than traditional advertising campaigns.

Husk is also able to save money on advertising through digital media and targeted email campaigns.

Before Husk products were sold at any grocery stores, they could be found on the shelves of Moody’s Butcher Shops in the Indianapolis area. Carter says that without this very early retail opportunity, Husk might have never gotten off the ground.

Currently, Husk works with only five farmers, all who are nearby and committed to CSA’s and farmers’ markets. Weaver’s Produce in Shelbyville has allocated 20 acres for Husk sweet corn, and Eli Creek Farms in Connersville produces green beans and peas for Husk. Other farms include Stout’s Melody Acres in Franklin, Wilson Farms in Arcadia, and a farmer in Attica who is new to Husk.

According to Carter, with the exception of Red Gold, which grows tomatoes, no farm in Indiana has grown specialty crops for the last 30 years—most farmers made the switch to corn and soybeans as they were more profitable. For example, Carter says, no shelled peas were grown in the state. So another obstacle to success is that farmers have to relearn how to grow specialty crops.

The goals of all three of Husk’s founders are to prove that their one plant is viable and profitable, and to find more farmers and consumers.

“We want to prove that we can do it on a small scale, and then do it on a larger scale, whether it’s three or 20 plants,” says Carter.

But the main goal is to help customers have year-round access to local foods at the grocery store.

Husk puts more of an emphasis on selling non-GMO foods than in selling organic foods (it doesn’t), and its products are certified by the Non-GMO Project.

“Consumers want non-GMO foods,” says Carter. “There are a ton of reasons to go non-GMO, including fighting monopolies. One company should not monopolize the food supply.”