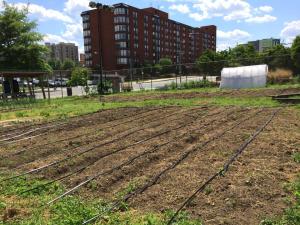 The urban farming movement finally appears to be coming of age in the nation’s capital.

No longer just a novel idea, it’s now on the cusp of receiving institutional support from DC’s city leaders–that is if its backers can get votes to line up in their favor.

Earlier this year, District Council Members David Grosso and Mary Cheh introduced a piece of legislation called the DC Urban Agriculture and Food Security Act of 2014 that would not only provide a framework for urban ag, but actively encourage it while fostering the consumption of local foods by underprivileged residents. Their bill seeks to achieve these goals through a three-fold strategy of identifying vacant city-owned properties that could be used for farming, incentivizing private landowners to lease out space to farmers through a tax abatement and offering a tax break for fresh produce donated to food pantries and shelters.

“This legislation will reduce a persistent barrier for the DC urban farmer, which is gaining access to viable land, while putting vacant public land into productive use for the needs of the community,” says Lillie Rosen, Food Access Director of the local foods group DC Greens, which has been working with the district’s city council on the bill. “It is also a meansof creating a more vibrant, thriving local food system that DC residents can take part in.”

The measure could make an economic splash too by encouraging local foods and in turn a market for value-added products like jams and tomato sauce.

Right now the bill is awaiting debate and possible amendment by the council’s Committee of the Whole and the Committee on Finance and Revenue later this fall. If city leaders choose to adopt the measure, DC would join a growing roster of municipalities with urban agriculture ordinances that includes Baltimore, Boston, Chicago, Cleveland, Detroit, San Francisco, Philadelphia and Pittsburgh.

Fittingly, the legislation has its origins in the grassroots, specifically a farmer named Gail Taylor who owns Three Part Harmony Farm and grows her food on borrowed land in DC’s Brookland neighborhood. In order to avoid a hefty pinch from the tax collector–an estimated $50,000 for those who own the property–she’s been donating most of her produce to charity. Frustrated by this situation, she partnered with Council Member Grosso and American University’s Washington College of Law to draft the urban ag and food security bill this past winter.

Change couldn’t come soon enough for DC growers. Rosen says over the past five years some urban farmers have left the city for better pastures in nearby Baltimore where urban agriculture has already been embraced by city leaders.

While DC has some rules pertaining to urban gardens, how farmers are supposed to legally interact with empty lots is still a headscratcher. Rosen tells Seedstock the new proposal would build on the groundwork of the Urban Gardens Program Act of 1986 and the DC Healthy Schools Act of 2010.

“This bill takes the city a step further by opening up more public and private land to grow and sell fresh fruit and vegetables,” she says.

The DC Urban Agriculture and Food Security Act would ask the city administration to identify 25 vacant, blighted or unused city-owned properties to be put up for a minimum three-year urban agriculture production lease. The bill also asks for a 50 percent reduction in tax costs faced by owners who lease out land to urban farmers as well as a tax credit of up to $2,500 for donations of fresh produce to food pantries.

According to Rosen, the bill is backed by for-profit, nonprofit, and community farming groups and is garnering public support from its focus on food access and bolstering small businesses.

She says some detractors argue “the city should spend local dollars on other types of urban development, like creating more mixed-use commercial and residential areas, rather than on food access.” Other opponents feel its 50 percent abatement doesn’t go far enough, she adds, and believe a decrease of 90 or 95 percent would better reduce financial barriers for farmers.

Proponents are also pushing for beneficial zoning changes and clarification about water access issues. Ultimately they want to ensure the final legislation meets the unique needs of the district.

“DC is not struggling with a vacant lot issue in the same (way) that (other) cities are,” says Rosen. “This bill is more about making sure that food production is a piece of urban development so that all parts of the city can have easy, affordable access to fresh fruit and vegetables.”