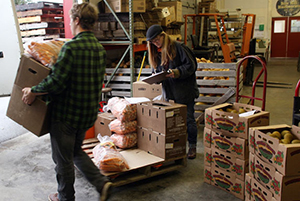 A college in central Pennsylvania wants to buy food from local farmers to feed its students, but how? A big box retail store and a hospital in Louisiana would like to sell and serve local foods, but again, how? Rather than having to resort to purchasing food through a large wholesaler, which often means food being shipped from thousands of miles away, local and regional food hubs enable local growers and buyers to connect, keeping dollars in the community and improving health and nutrition. The following are 10 food hubs across the United States that are making it easier to serve up local food.

The Puget Sound Food Hub in Mount Vernon, Washington, located in the state’s Skagit Valley, was started in 2010 as a weekly wholesale market. Four years later, the food hub has built a wide network of farms and other partners to help distribute locally-produced foods across the Puget Sound region. One of the organization’s key aims is to grow economic opportunities for sustainable farms in northwest Washington.

Chicago, Illinois sits in the center of one of the most agriculturally productive areas in the world—the American Midwest. Chicago is also home to Local Foods, the Windy City’s first retail and wholesale distributor of locally-produced foods. Local Foods works with many farmers from across the Midwest in helping them sell to individual customers, as well as to restaurants, grocery stores and other institutions. Items sold through Local Foods feature the company’s logo. Local Foods is also in the process of building a retail store, where customers can visit and purchase foods produced from Midwestern farmers.

Jack & Jake’s , located in New Orleans, Louisiana, started in 2010. One of its principal goals is to increase access to quality, healthy foods in underserved areas. It strives to make connections between local producers and consumers who desperately need good food. The focus is on delivering local foods to hospitals, schools, universities and communities that lack access to healthy food. Jack & Jake’s believes that greater access to quality foods will reduce the currently-existing high rate of obesity and diabetes in New Orleans and surrounding areas. Jack & Jake’s is on the verge of moving into a 27,000-square foot building in New Orleans’ Central City area. In addition to creating a food oasis in a food desert, its aim is also to become a food destination in the city.

Nashville, Tennessee-based Nashville Grown focuses on sourcing food within 100 miles of the city. Nashville grown emphasizes five principles in this quest: sustainable farming education, land availability, production education, food distribution, and branding and marketing. For education, Nashville Grown has partnered with The Center for Refugees and Immigrants of Middle Tennessee in an agricultural training and incubator farm to assist recent refugees in the Nashville area. Funding comes from the federal Refugee Agricultural Partnership Program. Nashville Grown also works to match farmers and gardeners with urban landowners—this way, more urban land can be devoted to farming. The food hub component of Nashville Grown was launched in 2012, and works to connect local small farms with wholesale and retail establishments. The organization also assists with food distribution and branding and marketing.

FoodHub provides a community for food buyers, sellers and distributors in California, Oregon, Washington, Idaho, Montana and Alaska. Described as the “Craigslist” of food, FoodHub’s objective is to make connections between food sellers and buyers quick and easy. Sellers fill out online profiles, and can even search online for their ideal customers. Membership is free.

In Charlottesville, Virginia, Local Food Hub  purchases a variety of foods from over 70 local family farms. Local Food Hub employees aggregate these food items in a warehouse, and then deliver the food to restaurants, stores, schools, hospitals and other institutions  more than 150 in all . The warehouse features several temperature zones, and Local Food Hub utilizes refrigerated vehicles for delivery. Local Food Hub offers a Grower Services program to educate farmers as how to best navigate the marketplace. The organization also makes sure that local foods are part of area food aid programs.

Dane County, Wisconsin started a public-private partnership that led to the creation of the Wisconsin Food Hub Cooperative. The food hub enables member farmers to sell to retail and wholesale outlets and other institutions. All products sold through the Cooperative are branded with the same label, while still identifying the individual farm of origin. The food hub was founded as the result of the Southern Wisconsin Food Hub Feasibility Study, completed in 2010. It was funded by Wisconsin Farmers Union.

Headquartered in Davenport, Iowa, the Quad Cities Food Hub fosters connections between farmers and customers in Iowa and Illinois. It is also a part of Iowa’s Regional Food System Working Groups. Its four key objectives are: a healthy environment, economic advantages to all along the food production chain, strong local identification, and sharing risks and rewards. Its core values include community, partnerships, health, education, and sustainability. Additionally, it facilitates a Quad Cities chapter of Buy Fresh Buy Local.