A Lexicon of Sustainability: Q & A with Food Information Artist Douglas Gayeton 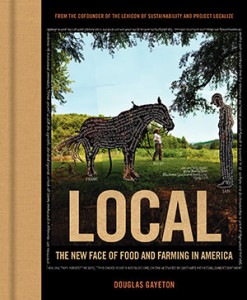 Douglas Gayeton is an award-winning multimedia artist, author and filmmaker. His most recent book, Lexicon of Sustainability, can also be viewed in short video segments on PBS.

Seedstock: Why did you decide to do a book when you have all of this great multimedia content? Why did the medium of actually having a physical book seem important?

Gayeton: Well, that’s a funny question. The challenge is that people always say, “Who reads books anymore?” Reality is that people do read books. I have a bookshelf of books, as I’m sure you do, that you’ve probably bought in the last year. So it’s not like books are not relevant. The problem with a book, though, is that it fixes like a fly in amber ideas. Sustainability is really a dynamic conversation. So these words and ideas are evolving, and even being defined as we speak. On one level, it doesn’t make sense to make a book. But from another standpoint, I think that the core ideas and principles that define sustainable food systems and how to build local food systems, those core ideas have never really been gathered in a book in such a comprehensive way, looking at every aspect of our food system. We really felt that this could be a valuable tool.

It’s interesting, in our office as we continue to work on films, and we continue to develop content that becomes artworks and goes on the web, we have a copy of the book on everyone’s desks, and everyone uses it as a resource guide. We know it’s a good tool because we use it ourselves here in the office. I’ve seen the value of books. Also, we really believe that the core audience for our work is, on one level everyone. But it’s also really, people who are younger who are really going to be the people who actually reshape our food system. We’re really big on the educational aspect of what we do, and having books that can be used in the classroom that can be a valuable resource to augment what teachers are already doing, is also really foremost in our minds. It’s what let us make the book.

Seedstock: Why do you feel that we need need right now to have this kind of encyclopedic tool, or what you call a lexicon of sustainability? Why is that important at this point?

What we decided to do was look at all of the elements that lead to climate change and find our solutions, and find ways to capture those core ideas, those core principles and terms, and then express them in ways that people can really easily understand them. So we started with food and farming. We spent four years going around the United States asking the foremost practitioners of sustainability to give us the one single term, or idea, or principle that they had built solutions around, that led them to be more sustainable. Then we shared those with others.

Seedstock: Obviously a huge amount of work went into this book in terms of writing and sketching and photography, not to mention all of the multimedia components. Was this a group effort?

Gayeton: We live on a farm an hour north of San Francisco. We have a number of barns. Right now next door, in the barn next door there’s probably eight people that are working on different aspects of our project. Some of them are animators. Some of them are interviewers, conducting interviews. Some of them are researchers. Some of them handle the logistics of how we take our content and put it in all this different media. So yeah, it’s definitely not a single person. And it’s also crowd sourced. We have people all over the US within this project.

Seedstock: You didn’t begin the book by defining “sustainability,” as many books try to do. You actually ended the book defining of sustainability through a series of vignettes. I was wondering if you could talk a little bit about your thinking in addressing the topic this way?

For example, climate change is not going to be solved by any one act, any one dramatic, big, sweeping decision that’s made by a government or by companies in terms of changing their practices. But the way that you approach climate change is by a whole series of coordinated activities, mindful, conscious activities that cumulatively have a very broad approach in effect. That’s really how we’ve approached everything with our project; you have to introduce such a wide level of re-imagining  to how we conduct everything in our lives. To simply reduce it to a simple catch-all phrase would be a real disservice, I think, to the movement.

Seedstock: In the very first page you exhort the reader to give the book away. Who should be the ultimate person that receives this book? Who is the ultimate audience that you’re looking for?

Gayeton: I think we all have people in our lives who we love or care for, but who we feel have different avenues that they travel on when they receive their information. I think that it’s amazing, but also probably not so amazing. If you think that we have 300 and something million people in this country, obviously the imbalance of different information sources that people can draw from are vast. I’m sure you know people in your life who you dearly care for, who don’t access the same information that you do, who would probably live or behave differently if they had the same knowledge that you had.

When I say that this book is not for you, what I’m saying is that if a person buys this book, they are going to agree with probably most of the ideas in it. In a way, the book is going to be an affirmation of some of the things that they know. Hopefully the book will lead them to understand even more deeply the things that they believe, or the things that they’re interested in, and give them even deeper knowledge into areas that they didn’t even know were part of the conversation. But also, at the same time, I feel like people have a responsibility. I think that change comes from people informing and educating each other, and sharing ideas with each other.