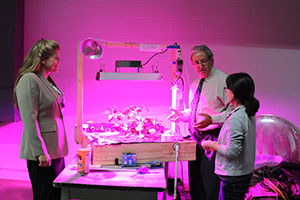 Kettering University and Metro Community Development in Flint, Michigan, are working together to build an aquaponics farm that could eventually feed area neighborhoods.

Once the project is finished, all parties involved hope to incorporate it into the Metro Community Development’s youth program, and to build a farm that will provide healthy, quality food to Flint residents.

“Aquaponics is still a fairly new technique and there is a lot of research to be done on maximizing production with different designs, fish, plants, monitoring equipment, and light and heat requirements,” Sanders says. “Assembling the right combination in a technologically advanced system that is economically viable is the biggest challenge. The system will use technology that will automate and monitor fish and produce.”

Although the project is underway, set-up costs have yet to be determined. Those involved with the budding farm are still weighing the pros and cons of what can be automated, and are researching different layout and lighting systems.

“The biggest cost associated with the system will be lighting and heat,” Sanders says. “We want to try to minimize those expenses as much as we can.” The project’s aquaponic system is custom-designed. Everyone that’s creating the system is building it to fit the facilities that are available.”

The goal is to build an environmentally sound system.

“We eliminate the need for chemical fertilizers by using fish waste,” he says. “We eliminate the wasted water that has to be treated in fisheries. We reuse all our water and only need to replace what evaporates off or is taken up in the plants. Water usage is normally one of the highest costs associated with these businesses.”

While the joint project’s main goal is to provide fresh produce to the Flint area, the project also aims to involve the community’s youth.

“The intent of this program is to teach them life skills and broaden their awareness of environmental conservation while working together as a team,” Sanders says.

This summer, a small prototype of the project was built and so far, it is working well. Project participants plan to use the Oak Business Center in Flint as a launching pad to start providing fresh produce to the city.

“As the system and demand grows, we plan to expand to a larger location,” Sanders says.

“We have a great location to build at, but in Michigan, the light and temperature are issues,” Sanders says. “Challenges are how to minimize our power usage while maintaining an optimal growing environment. Another challenge is that the production of plants will far exceed the production of fish. Setting up supplier agreements for the produce and fish to make this project economically viable will be a challenge.”

After the project is up and running, and plants begin growing, the project will begin to operate as a greenhouse and sell its produce.

“At this time, we are not set up for CSA, but it may be an option in the future.  Food donations of excess produce will be distributed according to MCD,”  Sanders says.

Currently, the farm is growing peppers, tomatoes, lettuce, and basil. Eventually, though, the finished farm will grow a variety of vegetables, fruits and herbs.

“This system will support a wide range of produce,” Sanders says. “Decisions on what to grow are based on several factors. First we put plants with compatible growing needs together.  Different plants require different temperature, pH, and nutrient needs. We also looked at different varieties for nutrition, taste, harvesting, and physical constraints, such as size.”

Sanders hopes the current project leads to several greenhouses that could possibly be set up at the local farmers market.

“I would like to be supplying several restaurants in the local area,” he says. “I would also like to have fresh produce available for anyone to walk in and purchase.”

Bees as Bellwether: Studying Colony Loss In the United States