Bees as Bellwether: Studying Colony Loss In the United States 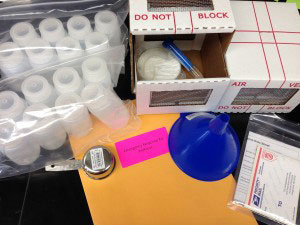 If you keep bees, have an interest in bees or have ever heard the often muttered phrase ‘Colony Collapse Disorder’ or CCD, you may have heard of Jonathan vanEngelsdorp.

Research scientist for the University of Maryland and former State Apiarist for Pennsylvania, vanEngelsdorp is the director of a nationwide bee data collection project, the ‘Bee Informed Partnership’ or BIP. BIP collaborates with backyard beekeepers and industry stakeholders to conduct bee-centric research. The goal is to make healthier bees and ensure that natural pollination ceases to decline. Over the last few years a lot of misnomers have sprung up in regard to the health of bees, and vanEngelsdorp and his team are working hard to educate Americans about thee state of our pollinators.

BIP began after the losses of the 2007-2008 season when vanEngelsdorp discovered Colony Collapse Disorder was radically changing the number of bees in a given area.

“We collected samples pretty extensively and what we found was those colonies had a lot of different viruses going on, but we didn’t find something in common. Now the media has taken CCD to mean any type of mortality at all and that was not the original intent for the coining of CCD,” says vanEngelsdorp.

“CCD, in the very strict sense of the word, I haven’t seen in three years. I would say there is evidence that colony populations in the United States have been in decline since the 1940s and that’s been a pretty steady rate of loss. I will say too though since we sustained this average of 30 percent loss per winter for the last seven winters, the number of colonies in this country has gone up, it’s not gone down. So there’s a difference between losses and decline.”

BIP offers American beekeepers the opportunity to be involved with their vital research into colony loss and decline. They have a National Management Survey which beekeepers can take to help them incorporate sustainable practices into their apiary.

“We process them and give them a report that shows where their disease levels are, how that compares to everyone else participating in the survey this year and then how that compares to the historical levels during that month over the course of our database,” says vanEngelsdorp.

The BIP’s ‘Emergency Response Kit’ allows beekeepers to collect sick bees and send them to the University of Maryland for analysis. Beekeepers can collect data for six months through the Disease Load Monitoring Service in order to establish persistent issues and find solutions. Tech teams visit apiaries around the nation taking measurements and recording regional bee data.

Recently, BIP added a pilot hive scale data collection program. The scales are placed below the hive and collect environmental and weight information.

“By integrating the hive scales into some of our long term monitoring, we’re hoping that in several years, we can come up with predictive models to tell beekeepers when its best to do what based on data from their own apiary that their receiving in very near real time,” says vanEngelsdorp. The hive data is sent to the researchers at BIP by use of an cloud portal which can be operated by smart phones.

According to vanEngelsdorp, there are three major factors contributing to issues in the world of bees: varroa mite, pesticides and hunger.

“I think they are all contributing; that means the solutions need to be multi-pronged. I think the important message is that honey bees are essential if we want to continue to produce fruits and vegetables in this country. It’s also good to realize that honey bees are the pollinator that we monitor. It’s one of the most well-studied insects in the world and we still know very little about it. But there are 4,000 other species of pollinators in this country that we know practical nothing about. So if honeybees are the bellwether, or the canary in the coal mine, there’s something going on in the environment. We need to find out what that is and we need to bring all things to the table and everyone is going to be involved in that solution.”