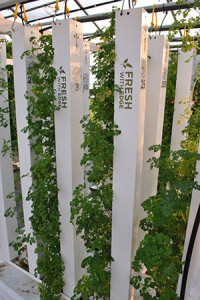 Herbs and greens grow at a Fresh with Edge greenhouse. When mature, they will be taken to homes, markets or restaurants, to be harvested. (photo courtesy of Chris Lukenbill)

Many restaurants boast a farm-to-fork experience, but how many diners are able to eat food harvested right before it arrives on their table? Fresh with Edge, headquartered in Rochester, Minnesota, makes it possible.

Fresh with Edge has found its niche in moving the farm indoors―to homes, restaurants and grocery stores. Its secret? Removing the need for soil by utilizing aquaponics and hydroponics to grow greens on towers. Herbs and greens at Fresh with Edge grow on 5-foot vertical towers in a greenhouse system. When ready to harvest, the towers are moved to a location where they will be consumed, such as a  supermarket or restaurant.

Founder Chris Lukenbill and his wife, Lisa, came up with the idea of Fresh with Edge in 2011. Their idea grew from a desire to know where their food came from.  Neither Chris nor Lisa was raised on a farm, but both have a strong base of agricultural knowledge, gleaned from aunts and uncles. Both work in computer science, and used this skill to establish a successful aquaponics enterprise.

Chris, a full-time web developer for the Mayo Clinic, devotes another 40 hours per week to Fresh with Edge. Lisa works full-time as well, and together they raise two young children.

The Fresh with Edge journey hasn’t always been easy.

“There was a learning curve in a lot of different ways,” says Chris. “Getting started was a huge hurdle.”

In 2012 at an aquaponics conference, he met with Nate Storey of ZipGrow Towers, who offered counsel and proved to be a valuable guide.

One such pursuit is in-home sales, which allows individuals to purchase their very own vertical tower with fully-grown herbs and greens, including lettuce, bok choy, kale and chard. The in-home towers are still “live”, with a working base and pumps and optional nutrients to purchase (advised if the system is run for at least one week before harvesting). And at People’s Food Co-op, Fresh with Edge sells produce by the ounce.

Chris says that his company is pretty much breaking even each month, with slight improvements.

“We’re just starting to break into the black,” he says.

Presently, Fresh with Edge has 300 towers in its facilities.

Chris would like to expand the market opportunities for Fresh with Edge by focusing on producing local, healthy and nutritious food. While Fresh with Edge does not advertise, Chris says the business is becoming better-known in the Rochester area. It also has a strong social media presence.

“There is lots of opportunity for more growth,” Chris says.