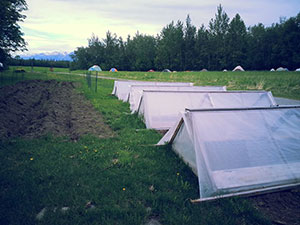 “The goal was to create a campus for the University, a very small one,” says Steve Rubinstein, the director of APU’s graduate program in Outdoor and Environmental Education. “And also to keep it as a working farm and to use it for other various educational aspects. We always had the goal of providing educational programs. It was not necessarily slated to become a vegetable farm, but that’s where we took it – it seemed to be a good direction.”

The Farm has internships for people who want to learn about growing.

“We also have a program for younger kids called Louise’s Farm School. We have about 50 kids a year in that program, year round,” he says.

In 2006, the Farm received assistance from an AmeriCorps grant, which was used to help the farm expand services. The farm also got help from the University and a grant from the Mat-Su Health Foundation.

“They gave us a quarter million dollar grant,” Rubinstein says. “That helped the Farm get its fully functioning CSA up and running. Spring Creek started with 12 CSA shares and now has 45. “We also have an interactive children’s garden, and we’ve done other environmental education programs and ag ed through the years with the assistance of that grant as well.”

If the Farm raises additional funds they’d like to expand many of its programs. In the future, Rubinstein also would like to make small plots available for a farming community program.

“It would be more of a business model than an educational model,” he says. To make the program a reality, he would need to organize partnerships with other local agencies for affordable loans, and find additional land to lease out.

The farm does face plenty of challenges, as it’s in Alaska.

“Spring Creek gets a lot of farmers from northern states who have grown in cold climates. They think the farming experience will be similar. But what the farmers don’t realize is that in mid-summer, the sun comes up at about 3 or 4 a.m., and sets around 12. “We have close to 20 hours of sunlight,” he says. “You have things that are growing almost continually through the day and night.” And there are some plants that are light sensitive that don’t need the extra sun.

While the Spring Creek utilizes most all of the standard sustainable, organic practices, it also uses soil amendments that are reliant on Alaskan fish.

Currently, the Farm is mid-way through its summer season.

“There’s not much of a fall crop here unless you are growing under cover. We’ve got summer and late summer stuff, and it goes as long as it goes, and then it stops,” he says.

Overall, the farm grows five different kinds of lettuce, all the root crops, and corn and tomatoes (if they are covered in things like greenhouses or high tunnels).

“Eggplant is almost impossible because of the light,” Rubinstein says. “You have to build boxes and it’s hard to pull off. I’ve had some luck with melons some years, but they are difficult to pull off. One thing I would say is that Alaskan carrots are probably the sweetest carrots grown in the U.S.”

While the farm has to make its own budget, the University helps if it falls in the red. “It breaks even every year. That’s what we aim for,” he says. “We usually fall within $1,000 or so with having a balanced budget. The land itself is available because it’s already owned, and the Farm does not need to contribute toward property taxes, so that’s helpful.”

When asked what farms should consider before opting to provide educational programs or classes, Rubinstein says that a farm should be doing well, and should expect to put in a lot of hours.

“Make sure that your operation is solidly functioning first rather than looking to make it educational as a way to keep it going or make it successful. Educational programs take a lot of effort and a lot of time,” he says. “If you’re offering more than just a ‘work on the farm and learn while you work’ program that takes a lot of resources and a lot of time.”