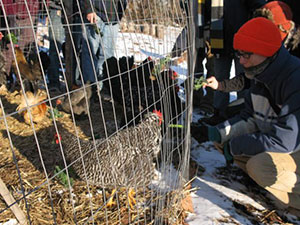 There are now food policy councils in every state across the U.S., tasked with bringing diverse stakeholders together towards the creation of policies and laws that help develop the economic, environmental, and social infrastructure that makes up a local food system.

Below are six food policy councils that have put in the work towards urban agriculture zoning, food access, and institutional purchasing, and have achieved results.

The Cleveland-Cuyahoga County Food Policy Coalition, founded in 2007, has been instrumental in establishing the food legislation landscape in Cleveland as well as facilitating and managing a variety of programs to improve food access for area residents and assist institutions with their local food procurement. The coalition conducted a thorough vacant land inventory for Cuyahoga County, and helped to create Urban Garden District Zoning legislation, which passed in 2007. Cleveland also passed a Farm Animals and Bees legislation in 2011 and an Urban Agriculture Overlay District zoning policy. This combination of policy efforts, in combination with water policy legislation, has allowed the coalition to facilitate agricultural production throughout Cleveland and the surrounding suburbs.

In addition to supporting development of the urban agriculture landscape, the coalition has been a force in ensuring that farmers’ markets in the area accept EBT and SNAP, and manages the Produce Perks program, in which customers using their EBT card at farmers’ markets receive up to a $10 match on produce purchased. The organization has also done work with institutional purchasing through the Cleveland Metropolitan School District, has conducted numerous community food assessments, and has played a role in creating regional resources such as the Local Food Guide and Cleveland’s Healthy Food Guidelines.

The Baltimore Food Policy Initiative in Maryland has made strides towards a sustainable local food system with a multi-pronged approach addressing food policy, retail food options, food production, and school food. In 2012 , the initiative worked to update the city’s zoning regulations to allow for more innovative urban agriculture projects, in addition to updating Baltimore’s health code to allow for the raising of chicken, rabbits, goats, and bees in the city. The initiative also worked to adjust a state level policy to allow and encourage farmers’ markets to accept food assistance benefits. The organization has also implemented a “Healthy Carry-Out” initiative and a “Virtual Supermarket” to increase opportunities for residents to eat local produce and other healthy foods. Additionally, the organization supports Homegrown Baltimore, the city government’s urban agriculture initiative and CSA, as well as the numerous farmers’ markets in the area. The group also works closely with Baltimore city schools to increase healthy foods purchased and served to students, in addition to facilitating a variety of sustainability and health related programming in the schools.

The Knoxville-Knox County Food Policy Council in Tennessee was the first Food Policy Council in the nation and in the world. Since its formation in 1982, the council has played a major role in expanding bus routes in the city and county to help residents access grocery stores, in addition to working with the local school districts to expand breakfast and lunch programs. The council helped to create an ordinance allowing for residents to raise hens on their property, and has mapped the area’s grocery stores, community and market gardens, and farms. The council has also provided general support for local food projects such as urban farming and community gardening as well as farmers’ markets. Their collaborative and diverse model has been replicated by food policy councils across the globe.

Established in Austin, Texas in 2009, the Sustainable Food Policy Board has made many accomplishments in the areas of agriculture zoning, healthy food access, and establishing a local food economy in the city. In 2013 the board was integral in establishing an Urban Farm Ordinance that allows for urban agriculture in every zoning district. Built out of a working group framework, the organization has also made progress towards establishing food security in the area, engaging the community around food system issues, establishing sustainable local meat processing, bringing healthy local foods into city and county facilities, and building capacity for healthy local retail options. This board focuses their work through policy recommendations and letters of support to the local government and backs their recommendations with data and research from their Codes and Metrics working group.

The Los Angeles Food Policy Council has helped to enable a collection of policies within the City of Los Angeles and the Los Angeles public school district that allow for urban agriculture and local food procurement. In 2005, the city established a Child Nutrition Policy requiring city departments to serve healthy snacks and foods to children in city-funded programs. The council has also incentivized retail outlets to open stores in urban areas, and has addressed fast food restaurants and environmentally preferred purchasing. Recent projects of the council include incentivizing healthy street vendor food and encouraging zero-waste planning throughout food establishments. The council backs all their programs and policies with research, including food system snapshot reports and community market research to support new urban food initiatives.

The Milwaukee Food Council has established a holistic approach to addressing food policy issues in Milwaukee, including both policy and programming. In 2010, the council worked with the city to create and pass the honey ordinance, enabling residents to begin beekeeping on their property, and in 2011 the city collaborated with the council again to pass the eggs ordinance, allowing residents to raise chickens for eggs on a residential property. In 2012, the council worked with the United States Environmental Protection Agency to create the Milwaukee Urban Agriculture Code Audit, which identifies potential legal barriers to urban agriculture. The council is dedicating to measuring the various facets of urban agriculture and the local food system in Milwaukee, in addition to supporting urban agriculture, fostering economic development, and innovating to bring low-income residents access to healthy foods.