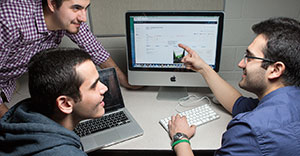 Engelsma, with fellow faculty John Ferris and Anne Marie Fauvel, aided students in the creation of a digital beehive scale and software application. The SolutionBee application, about to hit the apiary supply market, provides beekeepers with an opportunity to help scientists research the serious issue of bee health.

The project began back in 2012 when faculty member and trained biologist Fauvel began teaching students beekeeping on campus. Engelsma was a hobbyist of many years and the conversation turned to the need for a digital hive scale to help record fluctuations in beehive mass and further the study of honey bee decline. Used to ascertain bee health, digital hive scales were still a new concept, and an American application had yet to be developed.

Engelsma and Ferris decided to engage their senior students in a capstone project that would put their computer science and engineering backgrounds to good use.

“We really put a heavy emphasis on trying to involve our undergraduates and graduate students in multidisciplinary real world projects,” says Engelsma.

Ferris’ engineering students quickly developed a prototype digital scale run on solar power. Inside the scale are sensors collecting information about weight, temperature and relative humidity every 15 minutes, and a transmitting radio that utilizes Bluetooth technology. The radio allows for the stored data to be transmitted to an outside unit such as a cellular phone, smart phone, personal tablet or laptop in wireless range (approximately 30 feet).

After the engineering students created the scale, thecomputer science students developed the software. Engelsma’s Capstone students created a web portal using Cloud technology. Once the information has been transferred through Bluetooth radio to the phone or tablet, it is then transmittable to a web portal.  A weekly (or monthly or daily, depending on the beekeeper’s preference) visit to the scale is necessary for the data to be uploaded. The product was tested in 2012 and proved successful.

“We see this being beneficial to the larger bee keeping community because it gives the entomologists and the epidemiologists data that they don’t have today,” says Engelsma. “It’s also a practical benefit to the beekeeper, whether you’re a large commercial operator or if you’re a smaller hobby beekeeper, because by sitting at your desk and pulling up a web browser you can see the weight of that honey bee colony out in the field without actually going out there, and that’s pretty important.”

In 2013, Fauvel met leading apiarist Dennis vanEngelsdorp, an entomologist at the University of Maryland and director of a national coalition for honey bee research, the Bee Informed Partnership (BIP). BIP had been testing digital scales to aid in their data collection and published a favorable evaluation of the scale on their website in May of 2014. BIP is beginning field testing of two products, utilizing the software created by the students at GVSU. The scale is preset to upload collected hive data to BIP for immediate inclusion in their research.

“I think we’re really seeing the tip of the iceberg. I think we’re going to see a lot more electronic monitoring of honey bee colonies. It makes a lot of sense both for the beekeepers as well as the scientists that are studying honey bee health,” says Engelsma.

The scale is now being manufactured by SolutionBee, LLC, a North Carolina based research company. Beekeepers will be able to purchase the scale through the Brushy Mountain Bee Farm soon. The initial cost is approximately $450, but costs are expected to decrease as the scale grows in popularity.

For Engelsma, his peers and his students, the experience has been rewarding.

“It’s been really great as a faculty member to seek this opportunity to really help our students understand how they can help solve problems that are pretty serious problems in the world we live in,” he says.