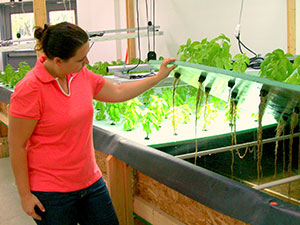 Aquaponic is a term that describes enterprises where aquatic creatures are raised and their wastewater is recirculated to help grow plants that in turn filter it for reuse. Located in a two-level building in the North Central Woodward area of the city, the grow station is now raising tilapia fish and cultivating herbs and microgreens to sell to area businesses.

“We are using a form of biomimicry,” Production Manager Anthony Hattinger tells Seedstock.  “We take what nature’s perfected and rework it and remanipulate it into an indoor space.”

Central Detroit Christian, the faith-based nonprofit development agency that runs the site is no stranger to food. It owns a soul food cafe and a gardening operation and produce market, among other businesses. As with these, the for-profit Farm & Fishery also has a social mission: providing jobs, skills and hope to residents in an impoverished service area that includes parts of Detroit and the enclave city of Highland Park.

The aquaponics station got its start two-and-a-half years ago when a former liquor store was donated to CDC. Originally, the nonprofit envisioned the building as a laundromat, but that fell through because the machinery would have been too heavy. Undaunted, Lisa Johanon, CDC’s executive director, began researching water-based food systems. She then linked up with aquaponics expert Randy Walker, and they began transforming the 6,000 square-foot-space into a cultivation zone for plants and fish.

CDC concluded construction last May after securing a license from the state, getting a special residential business permit from the city and spending $180,000 renovations and equipment. The first fish, breeders, were acquired in October of that year, and the first plants arrived this February.

As its name suggests, the Farm & Fishery is divided into two sections: crops up top and fish down below.

The basement is a watery realm with two enormous holding tanks that house a total of about 1,700 fish. There’s also a breeding area and a nursery section, as well a series of filtration tanks that make use of rocks, worms and bacteria to break fish waste down into a nutrient-rich water solution to feed the crops. Fish aren’t given any hormones or antibiotics, and they eat organic feed.

After being processed, water is pumped upstairs where it’s used to cultivate an aeroponic plant system with crops housed in trays that look like long tables.

“We couldn’t use traditional deep water culture (hydroponics) because it weighed too much,” says Hattinger. “So instead of having a foot deep of water with panels floating atop, we built a racking system and this mister system.” Under the setup, plants drink sprayed mist and their roots eventually grow to tap into a thin reservoir of water and nutrients at their tray’s bottom.

In addition to natural light from skylights, moving T5 fluorescent lights supply energy to the plants. Outside air passes through a UV filter and travels downstairs before being blown up by fans to provide carbon dioxide. The crops, a combination of  basil, wheat grass, pea and sunflower shoots and bean sprouts are grown without the use of pesticides or artificial fertilizers.

As it stands, the operation is still ramping up. No fish have yet been sold and the business is still wrangling up produce clients. Once the facility reaches peak production, Hattinger estimates each month they’ll be selling around 90 pounds of fish, 60 pounds of herbs and another 50 in microgreens to local restaurants, hotels, distributors and other smaller buyers.

Despite interest from the public and area businesses who want locally sourced food, the operation is still working on scaling its production and hammering out kinks in the system. When dealing with a living system, there’s certainly no shortage of things that can go wrong, according to Hattinger, as any problems will affect the plants, which will impact the fish and vice versa.

Beyond this, he says says Farm & Fishery struggles with reconciling high-tech agriculture with their social mission. Turnover among its five-member neighborhood-recruited staff has been a concern, as employees are apt to leave if they find more lucrative work.

“We’re here to empower, enable, employ, teach and establish people who maybe never had a job,” says Hattinger. “So that is the challenge really: how do you lift up a population that’s been cut off and oppressed from almost every societal resource available for the last 40 years and bring them into the new world of employment?”