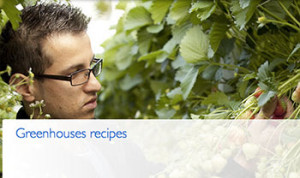 One of the most tech-savvy areas of the sustainable agriculture revolution is indoor agriculture – growing in warehouses, containers and greenhouses using hydroponic, aquaponic and aeroponic systems.  The industry has seen a wave of new technology commercialized of late, here’s some of the coolest:

The cynical view of the LED lighting that many indoor farms use to encourage plant growth is that it’s too expensive to buy and run, and too tricky to adjust the lighting to your plants’ needs.  Yet, LED prices are forecast to halve by 2020, according to market research firm Lux Research, and tech geeks are now making lights cheaper and easier to run.

Last month, Philips Lighting – a Dutch company that’s been in the lighting space since 1936 – introduced ‘light recipes’ which automatically optimize lighting for each specific crop over its lifecycle and mean “an increase in crop yields and reduced operating costs, while providing consumers with locally grown, fresh vegetables throughout the year” according to the Company.

The product is being piloted at Green Sense Farms in the Chicago area, where fourteen 25’ tall growing towers are housed in two climate-controlled grow rooms.  Philips expects that the product will use 85% less energy than typical LED lighting.

Using LED lights to grow produce means that – as a farmer – you’re spending a good deal of time in a grow chamber saturated in bright pink light, those being associated with the light wavelengths that the plants typically prefer.  That can really mess with your eyes.  Worse, it’s hard to see what how your plants are doing when they’re bright pink, not the green that we’re used to.

So, Method Seven’s color correcting glasses are a lifesaver.  The Bay Area-based company offers different glasses depending on your growing conditions; they block out the harsh yellow spectrum in HPS lighting, or blue and pink spectrums in LED lighting.  The result is that your plants look like they’re in daylight, and your eyes are protected.  The patent pending rare earth mineral glass is manufactured in Germany, and the Italian made frames are super-stylish.

Custom growing systems are so commonplace nowadays – they’re about half of all of the new tech that we see – that it takes something pretty nifty to catch the eye.  Listed Canadian firm Urban Barns launched its ‘cubic farms’ housed in a converted tomato storage facility a few weeks’ back.  The self-contained system is designed to be stacked, hence the name ‘cubic farm’, and this allows farmers to take advantage of every inch of their facilities.  The Mirabel, Quebec pilot project contains 10 cubic farms, is growing lettuce, microgreens and basil, and made its first delivery to customers last week, just three hours after the crop was harvested.  The company is now scouting for incremental locations in the western US, as well as planning for an expansion of its Mirabel farm.

Freight Farms is one of the more advanced of the container farm companies that are popping up around the country.  Founded in 2011, the Boston-based Techstars-graduate startup has several container farms installed on corporate and academic campuses and is now delivering them at a rapid clip.  One of the promises of container farms is that you can lock them up and forget about them for a while, normally up to a week or so, but that has been tricky to date as there’s been no way of controlling them remotely.

A part of the overall vision since the beginning, Freight Farms finally unveiled its FarmHand app last month, which allows a user to see what his farm is up to on his SmartPhone, and to fine tune settings such as pH and temperature remotely.  There’s real time video of your plants, and the app will even remind you when it’s time to harvest your crops.

Like many a good startup, Grove Labs began life in an MIT dorm room after a summer stint at a Virginian experimental farm gave co-founder Jamie Byron the impetus to add an aquaponic farm to his frat house.  Its success led to the realization that most people could grow food in their homes, and to the creation of Grove Labs which – with the backing of a recent $2 million funding round – is aiming to add in home ‘groves’, or miniature farms inside home appliances, to every kitchen.

The startup takes a completely new approach to indoor farming, recognizing that consumers would love to have in-house fresh produce if only it were simple and easy to grow it.  Grove Labs champions ‘ecoponics’ rather than ‘hydroponics’.  The Company explains the difference as: “In ecoponics, crops are grown in conjunction with mutually beneficial organisms — companion plants, mycorrhizal fungi, good bacteria, and even animals such as fish and earthworms — in an organic, ecosystem based approach to traditional hydroponics.”

Their product isn’t yet on the market, but you can sign up at the startup’s website to be one of their first farmers.

Nicola Kerslake is the co-host of Indoor Ag-Con, an annual event that unites farmers, entrepreneurs, tech geeks and investors in a discussion of the future of indoor agriculture.  Her day job is in venture capital.