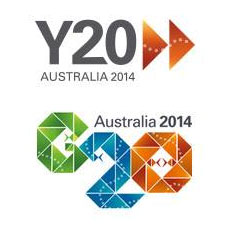 Edward Silva is a student at the University of California, Davis studying international agriculture, and is a founder of Henlight.

Recently, I experienced something that does not seem to happen often: over 120 youth from more than 20 countries around the world actually came to a consensus that entrepreneurship is the most overarching issue affecting youth globally. More specifically, entrepreneurship as it relates to food and agriculture. This overwhelming validation for agripreneurs is the result of a larger global experiment called the Y20 and signals a hopeful future for food and agricultural entrepreneurs globally.

This all started about two months ago, when I received notice I would be joining three other Americans under the age of 30 in Sydney, Australia for the Y20 Summit. This summit is a part of the larger global G20 Summit, which brings together a mix of leaders from the world’s 20 largest advanced and emerging economies, representing about two-thirds of the world’s population and over 80 percent of global GDP. The goal of the G20 is to discuss current global issues, share best practices, collaborate on new efforts, and build a global unity towards progress for the overall human condition. The Y20, which is comprised of youth delegates from each of the G20 countries, specifically focuses on youth. It gives them a platform to recommend particular policies to the larger G20 that are deemed important and advantageous for youth.

My area of focus upon being selected for the Y20 was to represent American youth on the topic of sustainable development with an emphasis in agriculture and food security. Growing up on a small farm in California and studying international agricultural development at the University of California, Davis has given me some background in this space, and a unique perspective amongst my peers. Additionally, I am also the co-founder of a small startup called Henlight, focused on developing appropriate technology for more sustainable and alternatives farming methods of pastured poultry. Although valuable, coming from an agricultural background has often leaves me feeling like a minority amongst larger groups, which was what I expected from the Y20. To my own surprise and appreciation, that was not the case and hopefully this story will shed some light for all young agripreneurs who may feel the same.

At first, the process of coming together with over 120 delegates from all over the world to develop, edit, and submit recommendations to the G20 seemed almost impossible. Thanks to a forum similar to Facebook called Yammer, we made it happen. The way it worked was each delegate would sign on to Yammer and join their respective group, I joined the Sustainable Development group. Next, the delegates in each group would present feedback about what youth in their particular country believed with regards to the specific topic. We would then debate and discuss the issues with a goal of narrowing down our ideas to the top three, which we would then send to the G20 after a series of votes from all Y20 delegates.

Upon working through these two months, something amazing started to occur, and this is what I believe to be the best part of this experience thus far. Over 100 youth who all grew up in different countries, with different parents, went to different schools, watched different TV and ate different foods, all began to independently merge to one concept: entrepreneurship.

“Promoting Youth Entrepreneurship” came up as the number one topic from all three groups, and although it took on different permutations in each, the consensus was clear. Even more amazing was the clear vision towards the value of entrepreneurship with regards to food and agriculture. Whether it was Italy, Russia, South Africa, Argentina, or so many of the other countries, creating a better agricultural and food system were top of mind with regards to sustainable development. This included suggestions like better use of agricultural waste for renewable energy, more technology transfer to help support small scale farmers, or promoting small and medium enterprises, which often include many food and agricultural entrepreneurs.

What was most interesting to me was the spillover that agriculture and food is making into the lives of people who did not necessarily grow up on a farm. In my parents’ generation, there was a strong movement to get off the farm. However, currently I feel like youth around the world are looking for more value in their food, diets, and agricultural systems. Although globally we are still facing large issues related to food and agriculture, such as obesity and deteriorating environments, what is important to note is that the next generation of leaders are already aware of this and are advocating for better food and agriculture through entrepreneurship.