10 Successful Farm-to-School Programs Across the U.S.A. 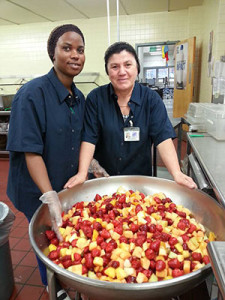 As the USDA has increased funding for their Farm to School Program, schools, school districts, and states across the country are investing in their own farm-to-school initiatives. Based on goals of increasing locally sourced healthy foods in school cafeterias, creating and maintaining school gardens, and increasing student educational programs on the topics of food, food production, nutrition, and cooking, dozens of programs are making a difference for students across the U.S.

Here is a look at ten farm-to-school programs that have been successful in meeting these goals and in improving the health of their students.

Created by the legislature and signed into law in 2006, the Oklahoma Farm to School Program Act has incentivized school districts in the state to source locally, while supporting and promoting various initiatives within the program. The program has expanded to the point that 110 of Oklahoma’s 540 school districts participate in the program, many of which sourcing produce directly from producers in their region.

Founded in 2008, the WSDA Farm to School Program has created numerous innovative projects to help procure local foods and educate students about their food. Every year, schools across the state participate in a “Taste Washington Day” where lunch is comprised of all locally sourced ingredients. Additionally, both food service offices and regional producers are able to participate in Farm to School workshops and training sessions. The program has also been successful in creating school gardens across the state, in addition to offering educational materials and opportunities for their students.

By creating a variety of resources including guidebooks for food procurement and local produce availability, Arizona has increased participation in the procurement of locally produced foods statewide. As of 2012, 77  percent of all school districts purchased a portion of their foods from local sources, with 50  percent of all “local food dollars” being spent on fruits and vegetables. The University of Arizona Cooperative Extension Service has also partnered with districts across the state to create and maintain school gardens.

What started as a local apples and cider pilot for K-12 schools in 2003, the New Hampshire Farm to School Program grew into a “Get Smart Eat Local” program in 2006, bringing local foods to 10 school districts across the state. The program continues to expand, helping to facilitate relationships between regional producers and local school districts while creating and distributing educational materials both for food service offices and for students. The program also provides resources for starting and maintaining a school garden.

REAP’s Farm to School program has helped Madison, Wisconsin schools serve over ten tons of fresh locally grown produce in 2013 alone. REAP works to incorporate locally grown produce into daily lunches, and their “Snack Bites” program serves over 5,000 Madison elementary students with a fresh and locally grown fruit or vegetable snack once a week. REAP has also brought their Farm to School programming into the classroom with the help of a related curriculum about food, and specially trained Americorps educators.

The California Farm to School Network formed in 2006 to help support and streamline Farm to School efforts across the state. The program helps to share resources, and connect regional producers to local school districts across California. The agricultural bounty of the state has allowed California to innovate and in many instances become the North Star for Farm to School programs. For instance, the Oakland school district in California has one of the best school garden-to-cafeteria programs in the country, where students can take part in the production of food that is later served in their schools’ cafeterias. In addition to this program, Oakland has instituted a California Thursdays program, where once a week, 100 percent California sourced and scratch-cooked meals are served to over 80 schools.

The Boston Farm to School program started in 2008 as a pilot with ten feature schools. Now, 58 schools embrace Farm to School programming, with a focus on sourcing farm-fresh foods in the schools’ cafeterias. Each of these schools features a different locally grown fruit or vegetable every week at Local Lunch Thursdays, and the city hosts several Americorps Vista members, who offer additional educational programming to students about food and nutrition. The schools’ gardening curriculum also teaches students integrated lessons about agriculture, science, and food. Additionally, five Boston schools now feature a guest chef on a rotating basis, to prepare special meals from scratch featuring local ingredients.

Founded in 2007, the Portland Public Schools Farm to School Program has currently increased their local food purchases to 30 percent of their total purchases. This impressive number also includes a 100 percent locally sourced whole grain bread, that is served in all Portland schools. Additionally, the Portland Farm and Garden Educators Network has helped the city to create and maintain school gardens across the city. As a part of the Ecotrust Food Hub network, Portland has been able to connect with local producers and reach their local sourcing goals.

Thanks to the Burlington School Food Project, the schools of Burlington, Vermont can proudly boast that one third of their food purchases come from local sources. The district offers free breakfast and free after-school supper for all students, as well as free fruit and vegetable snacks for all K-5 students. Lunches at Burlington schools always feature soup, a salad bar, and milk, in addition to other healthy options. Students participate in food-themed art projects and other food related educational opportunities, including an annual “Junior Iron Chef” competition, where students compete in a cooking competition using locally grown ingredients. Burlington also works to integrate their school gardens and greenhouse into various aspects of their curriculum. Recognized as the largest and most successful Farm to School program in Vermont, the program has benefited greatly from the Vermont FEED farm to school network, while standing as a model for programs across the state and country.