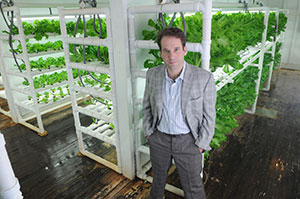 “The reality is that there is just less water available for agriculture than there’s ever been. As you look to the future, the amount of food production that’s needed and the amount of water we’ll have to do it, is going to require that we grow the food with less water than we do today.”–Matt Liotta, PodPonics

Selling their tubs of mixed greens wholesale to major retailers such as Krogers, Whole Foods and The Fresh Market, PodPonics has become a name to know in the world of commercial-scale hydroponic produce.

Established in 2010, PodPonics upcycles used shipping containers into lettuce growing machines. Pesticide free lettuce is picked locally and delivered to the store just hours after harvest. After a recent successful round of fundraising, this sustainable company is set to bring local food to desert regions across the globe.

The Atlanta-based company began with a single shipping container, trying to gain market share in the Atlanta mixed greens market.

“I think people sometimes fail to appreciate how big the salad mixed market really is. There is approximately $200,000,000 worth of salad mix sold in the Atlanta market every year,” says Matt Liotta, CEO and founder of PodPonics. Today, the Atlanta pod farm consists of 51 containers. With the recent influx of funding, the Atlanta farm is expanding to 102 pods. PodPonics will also increase the size and staff of their newer Dubai farm which currently consists of one container.

PodPonics outfits each used shipping container with their patent-protected, custom-built hydroponics system. The containers, or pods, can be stacked ten high and 100 pods fit within a single acre of land. Each container can produce four tons or 8,000 pounds of lettuce annually. The lettuce seeds come from Johnny’s Select Seeds Company and the lettuce is made available under the company’s“Lettuce Buy Local” mixed green brand. Currently, the Atlanta operation employs 36 people and the newer Dubai farm has full time employee.

“Our system really allows us to grow anywhere and what better way to prove that than to grow in the middle of the dessert in Dubai,” says Liotta. “We’re able to show with our farm in Dubai not only that we can grow it there, but that we can actually produce a product that’s better and cheaper than the imported product and is actually more sustainable from a carbon standpoint.”

Dubai is just the beginning for PodPonics. The goal is to create pod farms across the globe in regions with little arable land, water access issues and high priced produce imports.

PodPonics would like to expand their business to different regions of the United States but there are several obstacles to overcome before that can happen. California growers dominate the lettuce market in the United States and around the globe.

“From a business standpoint, it’s easier to make an investment in these other countries than it is other states in the U.S.; not that we are avoiding the other states in the US. We’re going to have to find a way to find the capital to do that,” says Liotta. “It’s fair to say the reason there is not more companies like ours in the United States is because of lack of capital.”

As the company grows, so too will the range of fresh food produced in the shipping containers. Liotta hopes to add regional varieties to their pod farms after establishing their local lettuce brand in various countries.

“I think we are going to increasingly see more controlled environment growing that leverages hydroponics so that we can have more precise control of our crop growth,” says Liotta. PodPonics is expected to announce the details of their expansion plans in the near future.