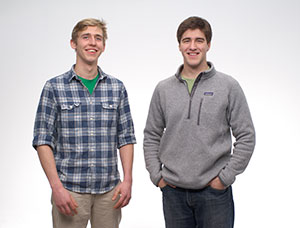 That idea developed into co-founding a company called Grove Labs. Blanchet and Byron are now CEO and CTO, respectively.

According to Blanchet, Grove Labs is developing a system that combines a full-circle-oriented gardening system using garden centers (the Grove) with a computer application that can also be used on a tablet or smart phone. The application is there to guide the gardener through much of the home farming venture. Gardeners will be able to modify their Grove(s) to suit their particular needs and preferences. The Grove can be used inside or outside the home, using sustainable systems to grow the food.

“We haven’t yet defined the scope of what data will show up on the app,” he says. “We’re still experimenting with what you’ll be able to control, like the lighting schedule, nutrients in the water, what plants you want to grow and matching conditions you want to grow them in.”

Blanchet stresses that, though the Grove Labs method involves technology, the actual gardening is, of course, hands-on.

“It’s not click-and-grow,” he says, laughing. “Basically, the app does three main things; it uses sensors/actuators to monitor the environment, it teaches you and helps you along, and it connects you with other people—gardeners and those who want to be gardeners—to create a support system. This is such an exciting time; you can take pictures of your food and share it with others—share what you’re growing. It supports a community of growers.”

Some people believe that soil is a critical component in growing their food, so the system will support both water-based and soil-based types of gardens, according to Blanchet. The important thing, he says, is that people are empowered to include food gardens in the home.

“At Grove Labs, we believe that everybody should be growing some of their own food. This is for several reasons: shipping or trucking food thousands of miles increases carbon pollution and the foods lose their freshness, there are food deserts across the country where people aren’t living healthy lives, and empowering people to live more healthfully is really important to us. We see our products as just part of the solution. What we’re saying is that people should be more connected to their food and have access to healthy food year-round.”

Blanchet stresses that much of Grove Labs is still in the creative stage but the foundational philosophy is to keep it eco-friendly.

“The main point is that we’re using ecoponics; we’re using nature instead of chemicals to grow our food,” he says. It’s a closed-loop system in which you can add fish waste without having the actual living beings in the system; you’re still using the nitrogen cycle and organic input.”

Grove Labs evaluates its success by taking a personal approach, according to Blanchet.

Grove Labs has recently received some substantial funding via investors from around the world, helping the company to its feet, according to Blanchet. Now, a new hiring phase has begun.

“This is just the start,” Blachet says. “We have an amazing core team and soon we’ll be expanding to double the size. Part of the interest is because of the hardware/software revolution; people like the idea of growing food while utilizing technology. We see that people are passionate about growing their own food. People see that Grove Labs is part of a potential future.”