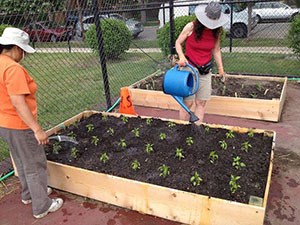 Peterson Grow to Give beds: Five percent of food produced on each of the community gardens is given to area organizations for distribution.
Images courtesy of Peterson Garden Project

The “We Can Do It!” spirit is alive and well in North Chicago due to one former corporate executive turned gardener extraordinaire.

“I developed this condition called lot lust. I see empty lots and I lust to put gardens there,” says LaManda Joy, volunteer Executive Director of the nonprofit, Peterson Garden Project.

When LaManda Joy moved home to increase her food growing space, she found herself passing the same empty lot day after day.  During a trip to a neighborhood butcher shop, she noticed a framed photograph on the shop wall depicting a World War II victory garden. It was the empty lot of her commute, on the corner of Peterson and Campbell. Joy was inspired to turn that empty lot into a pop-up victory garden, the first of many for the Peterson Garden Project that began in 2010.

“I thought it would be cool if 20 people wanted to do it. It ended up being the largest edible organic garden in the city at that time,” says Joy recounting the tale of the first garden site.

The sense of community spirit and local growing of the war years has always inspired Joy. She recalls the fact that 90 percent of Chicagoans that began home gardens and were involved in victory gardens during the Second World War had never gardened before.

The Peterson Garden Project gardens are “pop up” in the sense that they aren’t intended to last a lifetime. In fact, most have a shelf life of two years to five years. Joy finds empty lots around North Chicago, contacts the owner and instead of leasing or buying the property, asks if they can use it for as long as it’s available. A Memorandum of Understanding is signed by both parties and the gardeners move in and begin building the 4’ x 8’ raised beds.

All the gardens are raised bed style due to the possible hazards of trying in-ground organic gardening in a city. Once the garden is over at one site, the beds are simply moved to another site. This season alone the Peterson Garden Project is coordinating approximately 4000 gardeners in eight gardens and focusing on making more all the time.

Education is at the core of the Peterson Garden Project and the classes and workshops are as abundant as the vegetables. As well as a series of free classes for new gardeners or “grewbies” and monthly classes for established growers, they hold ‘in the garden’ expert question and answer time on a weekly basis. A volunteer coordinator on staff and Joy’s background in project management keeps all of the scheduling and people power ticking over.

Although the majority of gardeners harvest and consume the food they grow, five percent of the produce is donated to area food banks and nutrition programs through their Grow2Give program. Scholarship donations provide garden plots to low income families. The Peterson Garden Project has two paid employees and the rest of the work is performed by volunteers. Joy is a volunteer founder and executive director. Funding is tight for this nonprofit relying on membership dues, small grants and donations to keep things ticking over.

For LaManda Joy and the Peterson Garden Project it’s about normalizing the concept of urban food gardens and proving to people it’s possible by reminding them it’s been done before.

“All of the gardeners and people that have come with us over the years have helped us build every single garden,” says Joy. “People feel very attached to being a part of the project versus necessarily attached to a single garden.”

The Peterson Garden Project has produced a book entitled “Fearless Food Gardening in Chicagoland: A Month-By-Month Growing Guide for Beginners” and a community garden handbook is in the works and is expected to be published in 2015.