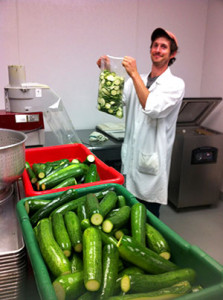 Fertile soil, water and compost aren’t the only ingredients that make a local foods scene blossom. Sometimes what’s needed is a helping hand.

In Waitsfield, Vermont this takes the form of a food warehouse, processing and distribution center known as the Mad River Food Hub.

The 4,000-square-foot facility caters to farmers and food processing businesses in central Vermont’s Mad River Valley. The area is home to several small communities and dozens of farms and serves as a popular tourist destination for skiers and summer idlers.

Founded three years ago, the Mad River Food Hub came about as a combination of the British entrepreneur Robin Morris’ love for local foods and his experience in the business world.

Despite his current work, Morris’ background is in technology. Prior to moving to Vermont in 1994, he served as the CEO for Systems Union Inc., a New York-based company specializing in financial and business management software. Later he worked as chief financial officer for the American Flatbread Company from 1998 to 2006.

His time with the artisan pizza company sparked an interest in the food industry. Eventually a warehouse used to store frozen pizzas became available when American Flatbread outsourced that part of their business; Morris jumped on the opportunity, eventually converting it into the food hub.

Morris’ ultimate vision is to have 10 percent of the valley’s food come from local sources. Although that might seem lofty, Vermont is a leader in the local foods movement and has adopted a state plan to grow its food system through strategic investment and coordination. Having aligned itself with this plan, Mad River plays a key role in nurturing the valley’s local economy, providing a place where farmers and businesses can extend the life of local products through processing and storage.

Now in it’s third year, the Hub is definitely making an impact. Last year it handled about $1 million dollars worth of food for local producers, up from about $800,000 its first year.

The facility currently has about 50 clients, some of whom drive an hour out of their way to make use of its services. Although Morris promotes the hub at food conferences, he says much of its advertising comes from word-of-mouth.

Mad River also has the means to distribute client’s products in the form of a 26-foot-long refrigerated truck delivers food to local destinations and places like Montpelier, Waterbury and Burlington.

The hub offers more than simply physical services, though, it also serves as a business incubator, offering mentoring and consulting to interested clients.

Just how much a customer makes use of all these service options depends on their needs.

Morris got the hub off the ground partly with his own money and partly with funds from foundations and government grants. His plan going forward, though, has been to avoid grant money. So far he’s been fairly successful, running Mad River on a business model that straddles the non-profit and for-profit worlds.

“You’re never going to be rich running a food hub,” he says, “It’s more of a social enterprise. Our goal was to break even, and we achieved that in our first year.“

The hub now has three people on staff: an operations manager, a truck driver, and Morris himself, who deals with marketing, business incubation and general administration. While he has yet to pay himself a salary, business is good enough that he’s looking to hire a general manager.

Processing capacity is now at about 60 percent at the facility. Morris hopes to see it grow to 80 percent in the next few years. He’d also like more business to be truly local, speculating that customers who now commute longer distances could eventually have hubs in their own communities.

“Were in the early days of local food,” he says,  “and I don’t know how this market is going to develop. I think its going to be interesting, and that we’re going to see more and more people wanting to experiment.”